Books on the English Revolution 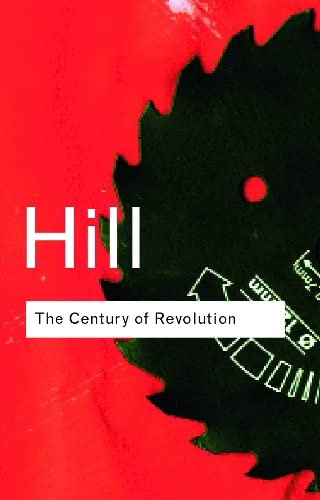 Christopher Hill’s The Century of Revolution, 1603-1714 was the fifth volume of the A History of England series. Hill was a highly influential twentieth-century British Marxist historian, one member of a group that included luminaries such as E. P. and Dorothy Thompson, Eric Hobsbawm, and Rodney Hilton. A long-time Communist, he joined the very influential Communist Party Historians’ Group after World War II. After the Red Army invaded Hungary in 1956, Hill left the Communist Party, although he remained a Marxist theoretician. Historians have long considered Hill one of the leading authorities on seventeenth century England, and he wrote many books on that era of history, including Intellectual Origins of the English Revolution, The World Turned Upside Down, and Puritanism and Revolution, among others.[1] In The Century of Revolution, Hillattempted (quite successfully) to refute a Whig interpretation of English/British history that emphasized greater democracy and constitutional liberties.

In this work, Hill argues that the century of the English Civil War/Revolution caused many major changes in the makeup of English society. He used these changes in an attempt to explain the transformation of England from a medieval feudal economy to a modern capitalist one. Among other issues, the author addressed politics, religion, and economics. He pointed out that England began the Stuart era with a divine right monarchy and ended Queen Anne’s reign with a quite limited monarchy that existed by the consent of Parliament. In the early Stuart era, James and Charles encouraged religious conformity, while freedom of conscience on religious matters gained an upper hand temporarily during the Interregnum and permanently after the Glorious Revolution (as long as the adherents were not Catholic). Government finance shifted from the royal household to a publicly funded system. Large landowners lost much of their clout as merchant capitalists obtained a greater share of wealth and power. In The Century of Revolution, Hillunderstood the entire period, but especially the Revolutionary period, in terms of class struggle. The importance of the seventeenth century has wide acceptance, and this interpretation was evident in Mark Kislansky’s recent (1997) general narrative of the seventeenth century, A Monarchy Transformed: Britain, 1603-1714. However, some of Hill’s contemporaries like Geoffrey Elton saw the origins of the modern English state in the early Tudor era with the work of Henry VIII’s minister Thomas Cromwell.

Hill structured The Century of Revolution both chronologically and thematically. The book has four major sections that break the long seventeenth century into four chronological periods that end with political crises: 1603-1640, 1640-1660, 1660-1688, and 1688-1714. Each chronological section has a short narrative of events and then moves into a more thematic discussion of major issues such as economics, politics and the constitution, and religion and ideas. Hill then provides a conclusion to tie each chronological part together. While these sections necessarily had some overlap in information, they were helpful in keeping the reader focused upon specific aspects of English society.

The Century of Revolution, although written by a Marxist, did not rely on a completely economic determinism. While economic concerns are of necessity treated as a factor, intellectual considerations also play an important part in Hill’s work. From a classic Marxist perspective, however, conflict, often based upon some measure of class, is also quite evident. While he includes a narrative of events, he points out that “history is not a narrative of events. The historian’s difficult task is to explain what happened.” (1) He argues that this transformation of Britain into a modern state not only impacted politics, economics, or religion, it “embrace[d] the whole of life.” (5)

In looking at the coming of revolution, Hill posits that a breakdown in “the unity of the Parliamentary class” led to a social revolution. (105) The large landholders tended to support the king, with a few exceptions, but monopolists and merchant capitalists tended to have opposing interests, and this is where a major break occurred that led to the revolution in Hill’s estimation. He points out that the revolution was basically “a revolt of the taxpayers.” (107) Parliament claimed to defend religion, liberty, and property, none of which concerned the masses of common folk much in the seventeenth century. Therefore, the implication is that the Civil War was in many ways a bourgeois/capitalist revolution. While the merchants largely succeeded in their revolt, other groups failed to achieve their goals. Groups such as the Levellers who wanted more influence in society had no success in their attempt at gaining political power, even though the middle class had been quite happy to utilize their help in the war against the king. The capitalist revolution succeeded; the democratic revolution failed.

Some of the ideas put forth in the seventeenth century caused concern for traditionally powerful Englishmen. Hill pointed out some of these same ideas in his Intellectual Origins of the English Revolution. Reformed ideas threatened the established order, and caused worry dating back to the time of Henry VIII. If every man was his own priest before God, some began to question the higher standing of certain members of society. Puritans taught a doctrine of spiritual equality. (81) Levellers, although not as radical as some groups like the communistic Diggers, favored expanding the franchise, although not universally. Opponents posited that such groups aimed to “raise the servant against the master, the tenant against the landlord, the buyer against the seller, the borrower against the lender, the poor against the rich.” (129) These fears fell quite in line with a Marxist class struggle paradigm in which the powerful use their position to exploit those below them on the socioeconomic scale. In scientific learning, Oxford and Cambridge briefly accepted new scientific ideas during the Interregnum, but appeals to traditional authority ultimately won out and “Puritans” (a very uncertain term) had to start their own academies based upon empirical research, rather than the acceptance of traditional authority.

The Century of Revolution did a good job of tracing the transformation of England over the course of the seventeenth century. Its thematic approach was preferable to Kishlansky’s more narrative approach that left more questions as to causation. In attempting to show a broad overview of important causative influences upon seventeenth English life that was also accessible to the general public, Hill achieved a high level of success. However, scholars who want to know from whence he obtained specific information for furthering their own knowledge of the revolutionary century will be disappointed with the lack of footnotes, which are quite sparse throughout the book. This lack of notes is partially ameliorated by a bibliography. The third of three appendices is interesting for an economic understanding of unrest, which corresponds well with the idea of a price revolution in the sixteenth century, as pointed out perhaps most notably by David Hackett Fischer in his work The Great Wave. Food price divergence from wages was most evident around the decade of revolt. Hill’s understanding of the seventeenth century was a dominant feature of the historiography of this very impactful time, and for that reasons deserves continued attention.

Review of Hill's Intellectual Origins of the English Revolution