Adele Cosgrove-Bray is a writer, poet and artist who lives on the Wirral Peninsula in England.

Coal Black Mornings is an autobiographical account of the childhood, teens and early adulthood of Brett Anderson, who forged a 30+ year career as a singer/songwriter with Suede and also as a solo artist in the fickle and notoriously competitive music industry.

This book focuses on Anderson's life before Suede carried him to fame with hit songs such as Trash, She's in Fashion, Animal Nitrate, and Beautiful Ones. The narrative closes at the point where the Suede band members sign their first recording contract with Nude Records, and consequently excludes any events which unfolded later, such as the band's commercial successes and failures, inter-personal relationships and inevitable tensions, the band's demise, Anderson's solo career, and then the re-emergence of a more mature Suede.

Anderson's father had various jobs over time but was primarily a taxi driver who had a great love of Classical music and history. His mother was an artist, and their council house in Haywards Heath in Sussex, England, was filled by her paintings and his father's collection of historical artifacts. Apparently, Anderson narrowly missed being named Horatio, after Nelson.

Along with his older sister Blandine, who later became a renowned ceramic artist, Anderson was raised in an artistic but financially-strapped family. He was painfully aware of not quite fitting in with the surrounding working-class culture. He writes of wearing only second-hand clothes and of being so poor he qualified for free school meals. The cheap cuts of meat bought by his parents inspired a life-long dislike of any meats.

It was Anderson's deep fear of remaining poor which drove his ambitions onward. Becoming very interested by punk rock and other music such as David Bowie and The Smiths, he instinctively gravitated towards wanting to be in a band of his own. Anderson describes how he gradually met the various members of the original Suede line-up, and how he lived in a succession of cheap accommodations in various London suburbs.

He notes how early Suede gigs tended to be overlooked by both the public and by the music press. At one such event there was only one person in the audience. But gradually things began to change. People began to pay attention.

Knowing little of Anderson's life but having enjoyed Suede's music for decades, it was perhaps inevitable that this book would attract my attention.

The focus of this book is firmly on one person's journey through an ordinary working-class childhood to early adulthood and the gradual blossoming of what later became a successful career. If you are looking for a kiss-and-tell expose or cliched accounts of hedonistic parties, booze and drugs then you will be sorely disappointed as Anderson maintains a refreshing aversion to such tales, and thank goodness for that.

His personal relationships are mentioned with minimal detail, indicating an intensely private man. Even his break-up with fellow band-member Justine Frischmann is politely discussed mostly within the context of how this affected the band, though he does acknowledge his emotional pain at her exit from his life and from Suede.

Interestingly, he does not use this book as a means to rake over old rivalries or conflicts, and some well-known names are conspicuous by their complete absence. This could be a case of having nothing nice to say and therefore choosing to maintain a pleasingly dignified silence.

While Anderson willingly shares his failures and misjudged choices, these pages reveal a warm yet self-depreciating sense of humour which might not be expected by anyone familiar with his observational, acerbic lyrics.

This book was apparently written for Anderson's young son. He also has a teenaged stepson, and is married to naturopath Jodie Anderson. 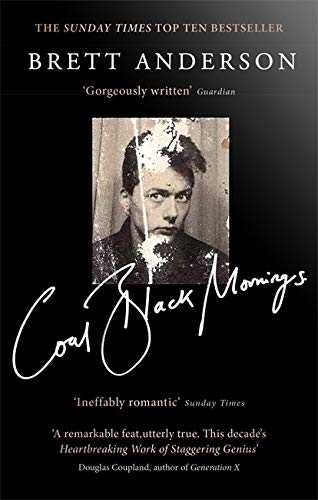 I've only two minor negative comments to make about Coal Black Mornings. The first of these is the over-use of the phrase "coal black mornings". Yes, it summons evocative and poetic imagery, and used just once it works wonderfully well. When used five or six times within the same book it swiftly loses impact. While a repetitive hook works well in a song or poem, this is not the case for prose.

My second grumble is the sparse usage of commas, which at times tends to result in overly-long and rather breathless sentences. This is a very minor point and is perhaps more an issue of narrative style.

The biographical and bibliographical information in the article came from:

Have You Read Coal Black Mornings by Brett Anderson?