Let me be totally honest.

Yes, I was prepared for what I was about to read (since the plot was hinted at in the first installment) and after a cast list of approximately thirty characters before the story started, I completely zoned out.

In this installment, a popular food show has come to Jewel Bay, Montana to film the popular Grill-off and highlight the town during the annual street fair.

One of the chefs is accused of stealing a recipe from another and at the last minute both chefs have to submit new recipes. Okay, no problem.

The producer is killed in a hit and run accident (which brings the character list down to twenty nine- yay!) and while main character, Erin Murphy, has become close to her, she steps in to make sure the rest of the weekend goes off without a hitch.

But not so fast.

On the day of filming, one of the chefs is murdered (that character list started to go down, but another thirty seemed to be added) before the results are revealed and now Erin gets involved with trying to solve two murders.

The murders only add to her problems as she wrestles with casually dating two men, making contacts with vendors at the street fair and making sure that her mother stops spending money that the store doesn’t have. Well, since Erin took over the store, it has seen a small profit.

As with the first installment there are summer type recipes after the story (quite a few actually) but nothing for ribs.

There is one thing I did learn though and that’s National S’mores Day is August 11. 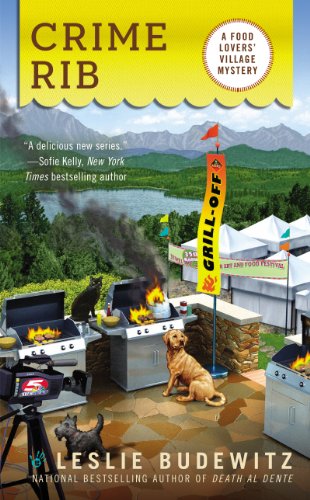