It may have been a couple of years since I last visited the Cupcake series, but when you pick it up, it's like being with old friends and not realizing that so much time has gone by.

Melanie (Mel) Cooper and Angie DeLaura are the owners of Fairy Tale Cupcakes in Scottsdale, Arizona and they love getting their business out there, even if the festivities are for the undead.

It's the first annual Old Town Zombie Walk and while they're getting into the "spirit" of the evening, Angie is visited by a familiar stranger from her past and escapes being the victim of an assigned hit. Thankfully, her past came to her rescue.

Meanwhile, Mel has to deal with her own past as she's trying to get over her breakup with Angie's brother Joe. He's working on a big case that could make his career and with the attempted hit on Angie, he wants to keep everyone around him safe.

Hilarity ensues when their brothers show up to do "security" at the bakery and this idea turns into a three ring circus, with the girls outsmarting the boys.

At the walk, two younger brothers (no relation to Angie) think that shop employee Marty is dead since their invention keeps giving them positive readings of death and the organizer of the event has a theory that the government killed the girl at the walk since she was, in fact a zombie and had gotten out of control (this could have been an interesting avenue to explore).

It was really easy to get back into the groove of this series and there really aren't a lot of twists and turns. I'm glad that McKinlay has toned down the movie quote references since it was a distraction in the earlier installments.

I wish I could put my finger on the pulse why this is a good series, but I can't.

The characters are developed like real people and a lot of time isn't spent on the romance like some crimozies.

However, the ending is rather abrupt (which prompts you to get to the next installment Vanilla Beaned immediately) so have that installment handy. 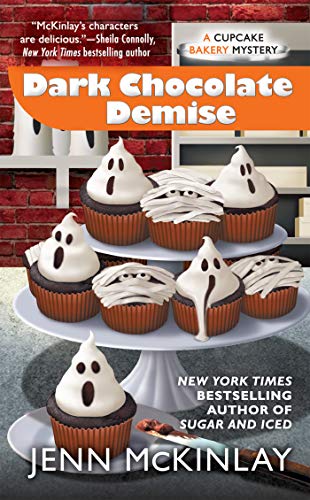