Book Review: Death Is Like A Box Of Chocolates by Kathy Aarons

Reading crimozies is basically like watching a Hallmark movie since the plots are virtually the same and unfortunately, this series follows the template, but not in a drastic way.

Michelle and Erica have been best friends for a couple of years and each owns a business under one roof. Erica runs the family bookstore and when the two decided to go into business together, Michelle opened a chocolate store on the other side of the building. The bookstore has always been popular and following the renovation of the building, Michelle's chocolate store has become just as popular.

Anyway, Memorial Day weekend is coming up and the store is having a Great Fudge Cook-off for the town's annual celebration.

Unfortunately, photographer Denise Coburn is found dead in the early morning hours following a committee meeting by Michelle. Of course Michelle becomes the primary suspect since Denise was found with a box of Michelle's chocolates.

As with any Monday morning, Michelle comes to the store early to try out new recipes (so that she can be alone) and shortly after discovering the body, Erica arrives and the two are questioned by the police.

Erica comes up with a detailed plan on how they can solve Denise's murder and since Erica is above genius level and has a level head, she thinks that the girls can stay at least a few feet ahead of the police.

At the same time, Erica's famous brother, Bean comes home and old feelings begin to stir in Michelle, while at the same time, Erica has to confront her feelings for police officer Bobby. Both of the men try to keep the girls from further investigating, but they are rather stubborn and vow to get the killer from a bevy of suspects.

And there are a lot of them, which is where you may start to lose interest.

As the book opens, Aarons introduces at least a dozen and a half characters before the twenty fifth page. I'm surprised that I didn't close the book right then and there, but after completing a rougher series, I figured this should be a piece of cake.

While the number of characters continued to grow, I knew that there was a story somewhere but I was having a hard time trying to find it. Something just seemed to be missing and at times, a spark would happen, but I don't know what was missing (even now, I can't put my finger on it).

The characters are interesting, but because there are too many, it's hard to say if this is possibly the missing link to the story and the number of red herrings.

I do admit that I was thrown with the murderer, and the only character that I was interested in was Reese Everhard. She should be put into the Quirky Character Hall of Fame.

Overall, this is a good book to get into and at the end there are a few chocolate recipes. 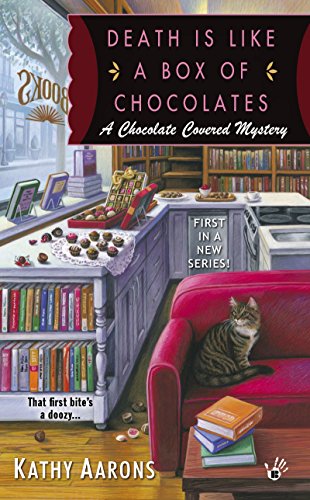