Somehow I think I’ve led you down this same path to murder. And quite recently.

But follow along as we travel down this boring path laden with embroidery thread and assorted textiles.

Willow Vanderling has recently moved to Elderberry Bay (known as Threadville by the locals since there are FOUR speciality shops clumped together) after leaving her high powered financial position in New York. She opens up In Stitches were she specializes in everything embroidery. Everything.

On her first day of business, the towns zoning commissioner, Mike Krawbach, comes into the shop with papers, encouraging the throngs of students, tourists and locals to sign a petition.

Eagerly they sign until Willow finds out that it’s a petition to demolish the cottage (known as Blueberry Cottage) in her backyard that runs along the trail, by the river and turn the land into an ATV trail.

Of course she mutters under her breath and later that night Mike is found in the yard clutching to life. It’s a good thing he dies, because as a reader, I found myself wishing that we could have changed places.

Unfornately, we the audience can’t take too much of this book, but, try as I might, I kept going, even though I was lost with the cast of thousands and wondering why I kept reading.

If there was any type of hope in this book, it comes from thinking that this little section of small town Pennsylvania was somehow facing a rebuilding boom. It’s mentioned early on that there were bus loads of people coming into the town daily and the town was profiting from these four shops.

However, Bolin seems to think that her readers must be brain dead morons who can’t quite comprehend a basic sentence.

First, she uses the tired first person narrative. We have to know everything Willow does, and quite frankly, Willow is nothing but a narcissist. You don’t feel any empathy for her since she’s a prig. She knows everything.

Secondly, Bolin continues to repeat In Stitches several hundred times in a paragraph. Willow doesn’t simply lock the door to her shop. She locks the door to In Stitches, runs across the street from In Stitches, where In Stitches sits on the block next to a market, while the moonlight reflects off the fresh fallen snow in front of In Stitches. Get the point? We KNOW the name of the damn store!

The last thing making this a horrible read is the main character is once again the primary suspect in the first installment. After all, she’s new in town.

My hope here was to have seen some type of character development, but no. I really didn’t care for any of the characters nor the entire book. 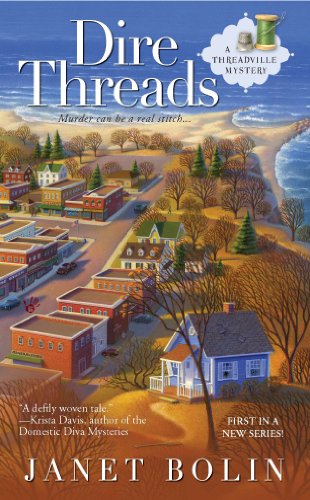