It’s always sad when an author has a brilliant idea for a book and it doesn’t translate well.

In the second installment of the Dream Club Mysteries, Taylor Blake and her sister, Allison (along with the other members of the group) are invited to a taping of a show for Sonia Scott, famous chef. Their friend, investigative reporter, Sara Rutledge was able to score the free tickets since she was working on a freelance story for the local paper.

Club member Lucinda Macavy is thrilled when she spots her former student Leslie Watts at the taping and is introduced to her husband, Jeremy, a member of Sonia’s executive team.

During the taping, Sonia’s assistant, Olivia Hudson, tracks down Sara and informs her that Sonia’s private jet is experiencing some problems and she’ll be in town overnight. Olivia wants to know if she can recommend someplace where they can do a quick photo shoot with the locals.

Sara suggests the Blake girls’ retro candy shop, Oldies But Goodies and everything is set up for the next morning.

During the book signing, Sonia collapses and is later pronounced dead putting Taylor and Ali in a bad light as they try to set aside rumors that they served her poisoned cookies.

With the bad publicity of Sonia’s death, the girls and the members of the Dream Club hope to solve another murde while starting up a new promotion. Free cooking classes based on Sonia’s best selling books in the hope of rustling the killers feathers.

In the first installment, this wasn’t so much a cozy mystery, but unfortunately this installment has all of the trappings of a cozy.

The one big problem I had was an emergency meeting was always being called whenever new information was discovered and while the club is “exclusive“ they tend to bring up other dreams unlike in the first installment where they focused on the murder and tried to analyze the dreams.

Although dreams are fascinating, Kennedy does try to open your mind regarding them. I think that’s what’s missing here.

Had the story been a watered down version of any of the Elm Street movies, I think it would have worked much better. 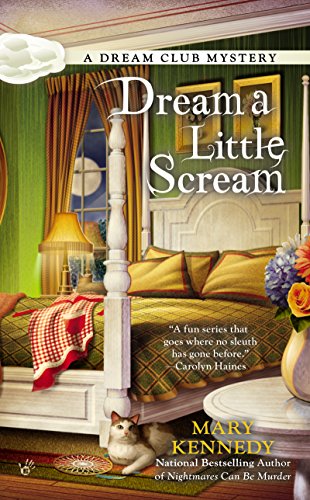