Book Review: Dying for a Cupcake by Denise Swanson

Fans of Denise Swanson who have yet to start the Deveraux's Dime Store Mysteries may be in for disappointment with this entry into the series. With no pun intended, the formula is your basic cookie cutter crimozy.

When the queen of cupcakes, Kizzy Cutler, returns to her hometown of Shadow Bend, Missouri to launch her new line of cupcakes, the town is excited about hosting a Cupcake Weekend over the Fourth of July weekend. It's two events for the same price, yet the cupcake competition lasts a few days longer.

Anyway, Deveraux "Dev" Sinclair has agreed to host the competition at her five and dime store which is being covered by The Dessert Channel and with some free publicity, Dev hopes the competition will bring in some new faces.

With her boyfriends, Jake and Noah out of town for the competition, she meets the new fire chief, Cooper McCall after a suspicious fire during business hours happens in the newly remodeled upstairs of the store. This is where the competition was to be held, but it also became the crime scene for yet another attempt on Kizzy's life.

However, Kizzy really doesn't seem to take this so serious (even though her assistant Fallon was murdered) it's pretty much business as usual for her and her surviving crew. But, what she doesn't know is Dev's learned a horrible secret from her past and as everyone knows, secrets somehow rise from the depths in an effort to rear their ugly head.

Unfortunately, the entire premise falls flat, since it's yet another murder mystery focusing around a baking competition. I also thought there were too many characters and with minor characters being introduced a quarter of the way into the story, I don't think they were utilized that much. Of course, they're there to throw you off.

As the story states, with both of Dev's boyfriends out of town, I didn't think there was a need to bring them up in a scattered scene here and there and I thought the ending was a scratch your head type of ending as it involved Jake. Based on why Jake was out of town, I think that his off the page storyline would have been a lot better than the same old plot.

Although I wasn't too impressed with this installment, I'm hoping that Swanson goes back to focusing on the small town, it's characters and especially the dime store.

Just having the dime store as a setting is sure to bring back memories of local stores like this, and good memories always bring a smile. 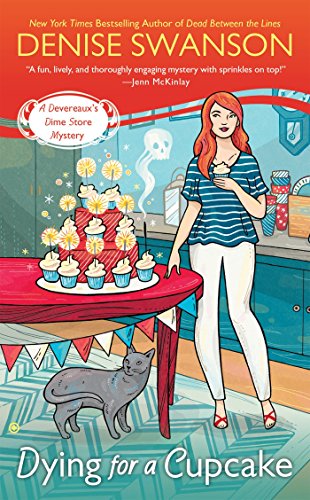