I’m not going to go all Annie Wilkes on Beverly Allen, but I was sad to end this great crimozy series.

As the final installment begins, the Rose in Bloom flower shop is designing the wedding bouquet for Andrea Rudolph’s Middle Age themed nuptials.

Audrey Bloom, co-owner of the shop learns that it’s not a themed wedding, but an actual recreation of the time period, at an actual encampment where hard core enthusiasts live as though its the Middle Ages for a week.

At the ceremony, Andrea’s father-in-law suffers an attack and is pronounced dead later at the hospital. With Audrey’s background in fauna, she believes that the victim was poisoned with monkshood.

The participants first suspect local baker, Nick Maxwell since he made the deadly stew but no one else has been effected so the local authorities rule him out.

Not only is there a murderer on the loose, Audrey also becomes the ”proud“ owner of her grandmothers house (which is falling apart) and an assortment of other problems while living between the Middle Ages and modern life.

Per usual for this series, Allen’s characters are outrageous and are a fun lot to spend time with.

The story is very fast paced and before you know it, you’re scratching your head asking where the time went. That’s how absorbed you’ll be.

I wasn’t too thrilled with the ending, but it did end on a high note with the possibility of further installments, but since too much time has elapsed, I don’t see any future installments.

It’s been a very long time since I’ve read such a great series (and each installment is on par with the previous) and there’s never a dull moment.

Grab an iced tea and a spot by the pool and let the tension leave your life while you spend some time with the folks at Rose and Bloom. 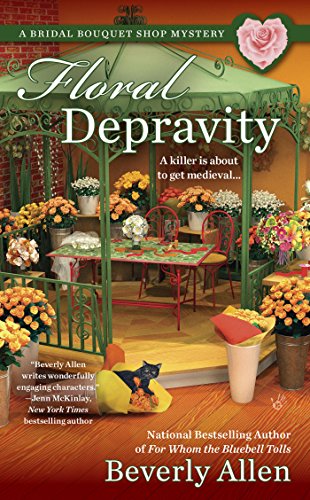