Before any book is written, the author needs to have an idea which is interesting and original in order to sell their story. Sometimes, it sounds good at the time, but somehow falls flat.

This is the what happens in this series.

In the second installment, Zoe Chase and company are competing in The Sweet Magnolia Food Truck Race. It’s a traveling race from Charlotte, North Carolina to Mobile, Alabama.

The five day race is a reality show competition which is also serving up a side of murder along the way. And unfortunately for the Biscuit Bowl crew, Zoe’s potential boyfriend, Miguel Alexander becomes the primary suspect.

In Charlotte, fellow Mobile food truck proprietor Reggie Johnston is found dead in his truck and it looks like an accident, but then a detective is killed in a hit and run an hour later.

Zoe spots Miguel with a mysterious woman (who follows the race) along with two officers from the Charlotte police department.

Food trucks are damaged and the host of the show is murdered while the contestants are eliminated in challenges which cause anger amongst them.

This is basically the crux of the story which for the most part was kind of confusing. The idea of a reality show competition was good, but the execution was painful to read.

Throughout the story/competition, the challenges were done at the crack of dawn and in each city, it was hard to tell if the show was live. For me, it added to the confusion.

Unfortunately, this doesn’t read as a mystery since the characters aren’t trying to figure out the murders. They seem to spend more time worrying about the competition.

I do like these characters and I did like the idea of the story, but it just doesn’t work.

You may want to read the prequel before this installment (link attached). I decided to skip this since it’s only available as an ebook and I prefer holding a book! 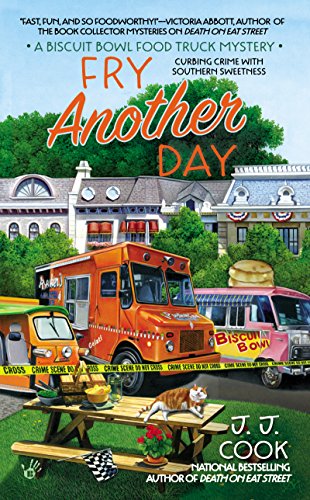