Book Review: Geared for the Grave by Duffy Brown

Of course murder is a serious topic, but is it okay to laugh at it the victim? Sure it is.

Evie Bloomfield really wants a promotion and will pretty much do anything for it, even if it means traveling to Mackinac Island to help out at Rudy’s Rides. Even though her boss, Abigail could have gone to help her father with his business, she feels its best to send Evie.

After a ten hour drive and a rough ferry ride to the island, Evie just wants to crawl in bed before diving into her weeklong duties, but that’s not going to happen.

The bike rental shop hasn’t been doing so good so when Rudy decides to go to dinner, Evie is left alone and then gets a call to deliver two bikes to a customer. As luck would have it, Irish Donna (part owner of the Blarney Scone) comes in looking for Rudy.

Evie tells her he’s gone and asks if she knows where she has to deliver the bikes. With the bikes in the carriage and the slow horse ride, Irish Donna informs Evie of the black cloud around her. No sooner does she mention it, they find Bunny Harrington wedged between trees, her bikes brake cables cut.

Irish Donna thanks her for bringing the black cloud to the island and from here on in, Evie’s bad luck begins.

Rudy becomes the prime suspect in Bunny’s murder, but with Labor Day a few days away, Evie persuades temporary police chief, Nate Sutter to keep the body at the market on ice. They don’t want to scare away the tourists, and Bunny’s homicide becomes known as the Bunny Festival among the locals.

While not a flight risk, Rudy is able to stay out of jail as Evie sets about to prove his innocence.

Having only spent a combined few hours on the island myself, I wish I would have met characters like this. I’m sure my time would have been well spent.

Anyway, Brown’s Evie is probably the most inept amateur sleuth ever written. Whatever can happen does and she certainly doesn’t gain any sympathy from the islanders or tourists.

While many crimozies sometimes take themselves too seriously, Brown has way too much fun doing the awful things to poor Evie and each page is loaded with a laugh or two.

The characters are certifiably crazy and I can guarantee that you won’t be trying to figure out who the killer is. Evie’s bad luck and the local characters are enough to advance the story.

Brown puts you on the island and convinces you that there really is a Bunny Festival and what she does to the older tourists, well, you’ll have to read for yourself.

Unfortunately, the ending isn’t that satisfying, but everything that’s written up to the end definitely makes up for the lack of a real ending. 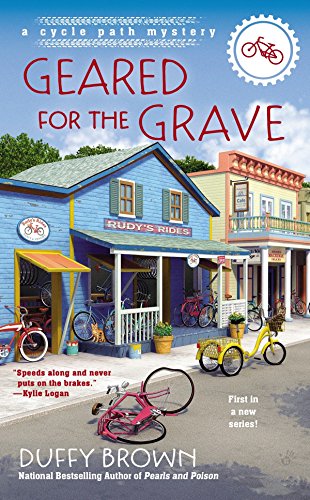 Geared for the Grave (A Cycle Path Mystery)
Buy Now