Beauty Pageants and Art Auctions Can Be Murder

There's always something a little creepy about beauty pageants for kids under eighteen, and in the third installment of the Memphis BBQ Mysteries, it's not surprising that (Ms.) Tristian Pembroke ends up dead.

That's the premise for Hickory Smoked Homicide by Riley Adams.

When Lulu Taylor is trying on dresses at Dee Dee's Darling Dress Shoppe, she overhears the owner (Dee Dee) talking with Tristian about contestants in an upcoming pageant. Both women don't hold back on their feelings toward the contestants and while Lulu doesn't find it odd that they'd be talking about the contestants, she does think it's odd that Tristian paid Dee Dee for the information she received. Who would have known?

Later, Tristian hosts a fundraiser at her home where Lulu's daughter-in-law's art work will be auctioned off. Her daughter-in-law Sara isn't too happy about going to the fundraiser since Tristian hasn't paid her in full for doing a huge portrait of her. Sara intends to put it up for auction once the actual auction is completed.

At the auction, Sara and Tristian have a very public fight (causing Sara to become a suspect once again in a murder) Tristian and her lover, Loren have a fight as do Tristian and her daughter Steffi. There's nothing like arguing to damper a good evening.

With Sara once again a suspect, Lulu starts to do a little investigating of her own as she enlists the help of her friend Cherry. They concoct a plan in which Cherry is going to do a total wardrobe makeover so the reluctant woman goes with her to Dee Dee's shop.

Lulu's other nine year old granddaughter, Coco (and twin sister to Ella Beth) enters the pageant with Cherry wanting to "learn" what it takes to become a pageant coach. No one finds it odd that this is what Cherry wants to do.

Lulu also has to contend with a blogger who has recently moved to Memphis and is set up by her son Ben. As she tells him that she's been happy being alone for years and now she's not sure if she wants romance in her life.

I thought that this installment has been by far the best so far. The plot is great and in keeping with the murderous style of Adams, there is a double homicide and the ending is unexpected. I should have saw it coming and maybe I did think for a moment but the thought slipped my mind.

On the downside of this installment: Adams continues to slow the pace down by having details repeated many times throughout the book. I was also confused since one of the character's last name kept changing from Walter to Walter's and there is a problem at the end with the type of vehicle the murderer is driving. Although minor, it still made me wonder who should take the blame here.

Also, in the previous installments, it's spring but there doesn't seem to be any time change. I was confused as to if years had gone by, or is Lulu solving a crime every other week? It's referenced earlier that Derrick in the first installment was spotted going into a tattoo shop, but now he's fully tattooed and if memory serves me right, he didn't have any tattoo's in the beginning.

Anyway, that's just my opinion and as usual, Adam's includes some recipes at the end. Not being a fan of tomatoes, I think I'd skip the tomato pie. 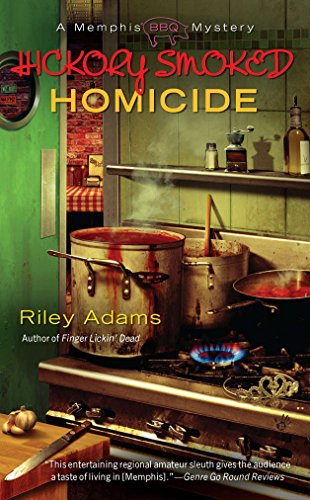