Jonathan Strange and Mr Norrell is the first book of such length I’ve read in quite some time. While I am no stranger to long, deep reads, I must admit that I was quite thrown off at first by the sheer volume of text (being such that the only copy available to me at the time was the hardback version). The book is an excellent one, and it is decorated with beautiful drawings by Portia Rosenberg. The language of the text was exceptionally well-written and the characters so very lifelike, which is understandable considering how the book is written and probably meant to be read. Susanna Clarke’s book is, in many ways, a history. It is written much like a historical account of some sort or another is generally written, complete with extensive and lengthy footnotes that would rival Herodotus, collections of journal and periodical writings to challenge Stoker, with an odd oral flair reminiscent almost of Tolkien. Her methods of weaving together odd sorts of events and persons into a cohesive, flowing text is remarkable and so very much like the history books that I have poured over in my years studying and researching as an undergraduate. I feel like this aspect – the historicalness- of the book is both its strength and its weakness.

We are introduced first to a Mr John Segundus and his fellows, who, through their actions, then introduce us to the second of the two titular characters. Within just a few short chapters, the entire livelihood of Segundus and the society of York magicians is ripped from them by Mr Norrell, England’s first practical magician (as opposed to the theoretical magicians that have so long plagued the country) in centuries. The reader spends much of the beginning of the book becoming familiar with Norrell and his associate-servant Childermass. Later, slowly, we begin to read about Jonathan Strange, and eventually the two are united and the real history of the return of English magic begins. Strange and Norrell’s relationship has more ups and downs than a heart monitor. Somewhat strained at first, they become closer and closer, yet the two cannot seem to ever work on the same page willingly. It becomes clear that Jonathan begins to exceed his master, yet Norrell never gives any indication that he is aware of his pupil’s exceptional growth, or it is brushed off as youthful nonsense.

The machinations of the two magicians continue to thwart one another, particularly once Strange and Norrell part ways, no longer continuing on as master and pupil. From there, the real fun begins, and through it all the unnamed gentleman with the thistledown hair seems to be plucking strings and weaving webs to suit his own desires- though it appears to be Norrell’s own fault that this fairy gentleman is even in the history. Yet, it is through the gentleman’s greed that his own downfall is later assured. The reader grows to harbor an intense dislike for Mr Norrell for being reclusive, arrogant, and easily swayed by the opinions of idiots such as Lascelles and Drawlight, and of course for hiding that beautiful, wonderful collection of books from Jonathan Strange, which any bibliophile (magician or otherwise) would give their left arm to even just catch a glimpse. Yet at the same time we find ourselves cheering him on when he does succeed in something, because through Jonathan the reader learns empathy for the older man.

Jonathan Strange’s role is most important, not simply because his name appears first in the title, but because he represents the new, whereas Mr Norrell is the old. It is Norrell we have to thank for Jonathan Strange’s newfound love and career as a practical magician, and so it is to Norrell that we ultimately must give our thanks for everything, even though he himself nearly succeeded in ruining everything just as quickly and easily as he caused it to begin. Essentially, everything Norrell caused, for good or for bad, was changed by Jonathan. Anything good Norrell created was expanded upon and heightened by Strange; while everything bad was ultimately fixed and saved. Mr Norrell occupies a very strange position in the story, because it is thanks to him that England found its “savior” magician in Jonathan Strange, yet had it not been for his meddling in the first place, England wouldn’t have needed Strange at all. Likewise, the reader is pushed to dislike Norrell, yet sympathize with him at the same moment, because of another comparison that cannot be overlooked between himself and his pupil: that of human companionship.

Arabella, Jonathan’s wife, and Childermass, Norrell’s trusted servant, are those important persons. We pity Norrell, not because the only human contact he seems to have is his manservant, but because we see how Norrell treats Childermass throughout the story, and we begin to despise Norrell for his arrogance and haughtiness, and the reader cheers when Childermass himself succeeds and comes out on top. Jonathan Strange nearly literally walks through fire and brimstone to save Arabella, though it is partially his own fault that he had to do so. Arabella and Childermass are treated, in many ways, similarly by the two magicians, yet it is Jonathan, and not Norrell, who realizes this mistake. He then not only feels remorse, but does everything in his power to change the situation. Norrell does nothing, yet we sympathize with him.

The story and narrative development is phenomenal. Clarke appears to be a master of foundation and piecing together such tiny threads. When something new happened, for no apparent reason, it was quickly linked to something previous, while at the same time laying a path towards something that was coming. Rarely was a loose end left hanging, and by the end of the book all such strings were neatly trimmed and tied. I found myself quite relieved when I finally finished reading Jonathan Strange and Mr Norrell, for many reasons. Certainly some of it had to do with tediousness of the book itself. The book is, as I’ve said, most excellent and one of the most masterful works I’ve read in quite some time, but it is still quite tedious to read, especially if you concern yourself with all of the footnotes throughout the story (which my historical training did not allow me to overlook in the least). The flow of the book, while good and always looking forward does in parts become stagnant and tiresome, but as Professor Drout said in his lecture on Tolkien,1 this stop and go narrative, those low points, are required to better isolate the excitement. And the book is exciting, though not in the fast-paced way most fantasy and fiction books are.

My relief also came at the hands of one of the most wonderful endings a book has given me. It was quite perfect, I believe. It offered resolution from the most problematic issues faced by both Norrell and Strange. The people who were most wronged were set right once again, though at the cost of something greater. Despite this “cost” there was hope in the ending, that everything would once again be perfectly right with the world, and the knowledge that this was only a minor bump in the road. Such is life, after all, and like Jonathan Strange and Mr Norrell, we are left to our own imaginings as to how it might end. 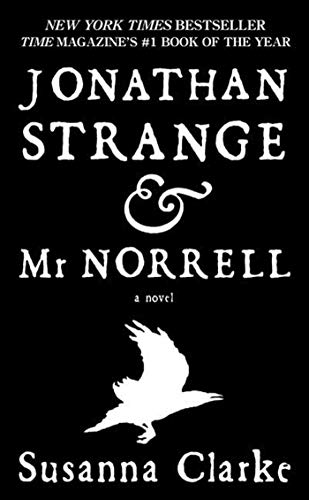