As Nell Pratt begins to settle in as the new president of the Pennsylvania Antiquarian Society, she's faced with a lot of challenges. Not only with personnel decisions, but, she also finds herself in the middle of a murder investigation once again.

When she receives a call from Arabella Heffernan, the president of the children's interactive museum, Let's Play, to get a sneak peek of the exhibit for Harriet the Hedgehog, Nell's delighted to check it out. At first, the two get more acquainted with one another and then Arabella takes her on the tour of the museum.

Arabella has one of the workers, Jason, set Willy the Weasel into motion, but he's electrocuted. Fortunately, he survives the shock and the next day, another worker tests the animatronic and is also electrocuted but doesn't survive.

While Nell tries to figure out what happened at the children's museum, she does find it a little strange that Arabella is kind of flip about the accidents. She keeps insisting that Willy had been checked out by many electricians and that he did meet the electrical requirements, but Nell finds that she's just not acting right.

Also on impulse, she hires Shelby Carver to do her former job. She doesn't recall having an interview set up with her and after doing the interview, she hires her on the spot. On paper, Shelby seems qualified to do the job as fundraiser and while she's distracted by internal functions, she keeps trying to find an assistant.

Shelby knows of someone who needs a job and later that day, Eric Marston comes in to interview for the position of assistant.

Nell decides that she'll give him a two week probation trial since she desperately needs an assistant and later finds out about his past. She also finds out about Shelby's mysterious past as well.

But, that's not all Nell has to contend with.

She's now being harassed by the children's author, Hadley Eastman when she tells Arabella that maybe Hadley's the target for the problems at Let's Play, which she finds to be ridiculous.

As crimozies go, this installment is okay, but you either like Nell or you don't.

Since it's been awhile since I read the first installment, I found that I did like Nell as a character, but, I couldn't grasp my way around this installment. It felt like it was more of a work place drama than a mystery.

While Nell likes Arabella and wants to help her, I don't think in the real world that too many people would drop everything and rush over to help a "competitor" nor do I think many people today would help in an investigation if they weren't directly connected to the crime.

One of the other problems that I found with Nell was that she's trying to be something that she's not. She's trying to be tough, yet nice, to her employees and spends an awful lot of time going to lunch. In fact, the proofreader must have been to lunch since she and her friend, Marty, go to lunch in January and leave the restaurant in the early November chill.

Fundraising the Dead did kick the series off to a good start and I'm hoping that this installment was just a bump in the road. 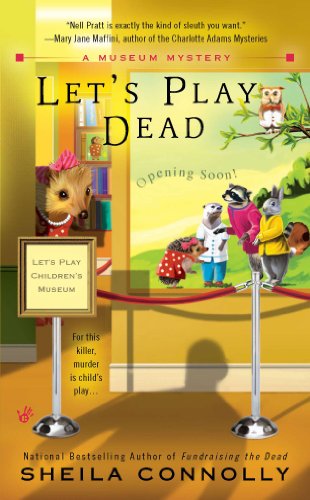