Book Review: Mayhem At The Orient Express by Kylie Logan

We’ve all had neighbors that have been good or bad, but what happens when you’re continuously taken to court? And the judge is tired of seeing you.

For neighbors Bea Cartwright, Chandra Morrisey and Kate Wilder, this is basically a weekly event and judge Alvin Littlejohn is tired of seeing the three of them as they continue to squabble and can’t get along.

While the three haven’t been able to settle their differences, he comes up with a plan when his librarian wife Marianne bursts into the courtroom panic stricken. She apologizes for the disruption and tells him that the library will be forced to shut down if she can’t get a book discussion group formed. If that happens the library will lose funding from the estate of Lucy Atwater.

Judge Littlejohn comes up with the neighbors sentence: the three must report every Monday to the library for a book discussion. And the three aren’t pleased about having to attend.

Marianne suggests they read and discuss the Agatha Christie classic, Murder on the Orient Express.

The following week they trope through a snowstorm and after a few minutes of more arguing they leave, determined not to partake in the discussion.

Before going home, Bea decides to stop at the new Chinese restaurant, Orient Express and finds the others just arriving. They continue bickering and once inside, they find owner Peter Chan stabbed in the heart.

Back at Bea’s B and B, the three try to figure out who could have killed Peter and as the night goes on, unexpected guests begin to arrive at the B and B, due to a power outage on South Bass Island and the ferry has stopped running due to the snowstorm.

Since Bea has a backup generator the guests are stranded for a week while the neighbors try to solve the murder. They believe that the murderer is one of the guests since no one has been able to get off of the island.

When they figure out that life is imitating art, they do the unthinkable and try to flush out the killer, but will they succeed?

While I’ve never read a Christie book, I am aware of the plot for this classic and in the preface, Logan says that she wanted to do a twist on the book. And she has done an excellent job with this story.

From the opening courtroom “drama” to setting up the story, it’s definitely a page turner and does have a rather great and unbelievable twist at the end.

The characters are top notch and while Bea has left New York, she comes to the island under suspicious circumstances. This is probably a first for a crimozy, but the book should be appealing to anyone who enjoys a good mystery.

There are four other installments in this series and each tackles a different literary classic.

If the other installments maintain this level of writing I’ll be one happy camper. 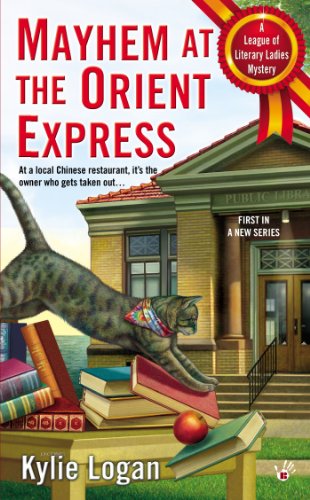