Book Review: Meow If It's Murder by T.C. Lotempio

Sometimes you never really know what you're getting yourself into and then there times when you wish you hadn't gotten involved.

For the debut series of the Nick & Nora Mysteries, I have to admit that I'm a little conflicted, but I'll get to that later. Here's what you can expect.

On a yacht the night before her fifteenth wedding anniversary, Lola Grainger finds what she's looking for and knows that the information could get her killed. It does.

Meanwhile on land, former crime reporter Nora Charles is getting used to her new role as sub shop owner in her hometown of Cruz, California. The shop used to be owned by her mother who recently passed away and was good friends with Lola Grainger, who's murder was a couple of weeks following her mother's death.

Nora's friend, Chantal, a self proclaimed psychic, comes into the shop with a prediction that she heard from a fellow psychic regarding Nora's future. She's told that she'll be meeting someone "dark and handsome" and the other psychic warned of danger.

While Nora doesn't believe in psychic's, she humors her friend when at the door is a stray cat, who's overweight and dark. He takes to Nora like a fish to water.

Nora doesn't want a cat and she tries to find the owner and sets off on her own adventure trying to find Nick's (if you name them, you know you're involved) owner. Her friend Lance had told her about a PI named Nick Atkins who used to carry the cat's picture in his wallet.

She meets up with his partner, Oliver Sampson and he tells her that he disappeared after going to meet a client. Nora finds out that the cat's name is Sherlock, and since Oliver doesn't want him, he tells her that the now Nick was pretty smart and that human Nick was teaching him to play Scrabble.

As a former reporter, Nora begins to put two and two together when Lola's death wasn't an open and shut case as the police were implying. And with the disappearance of Nick, she begins to dig deeper into what actually happened on the yacht and her findings could get her killed.

Since this is the first in the series, LoTempio used a subject that is quite touchy (and still unsolved). The book eerily parallels the mystery surrounding Natalie Wood's drowning (and Lola Grainger has a fear of water as well). Even to this day, we're still intrigued by the actual mystery of what really happened.

But, the problem with this book is the editing. There are so many distractions that I wanted to ship the book back and have it re-edited.

The discrepancies begin on page two, with the mention of Patti Simmons. Later she's referred as Cunningham and then back to Simmons. This back and forth is enough to make Sybil sane, there's confusion over the time frame of the story and I found the biggest mistake was the KMG offices moved from the sixth floor to the eighth floor with the turn of a few pages.

It's the little things that bothered me, but, the story flows and it was quite a feat taking on a true life crime, fictionalize it and making it it's own.

If you block out the flaws, I think you'll like getting to know Nick and Nora. 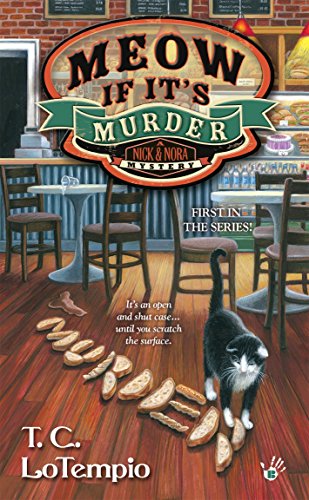 Meow If It's Murder (A Nick and Nora Mystery)
Buy Now