An Introduction to "Mistborn: The Final Empire"

Being Skaa means being a slave. Beaten, tortured and subjugated for 1,000 years by the Lord Ruler, the Skaa of the Empire have lost their will. Whether in the ashen laden fields of the country or the ash covered streets of the city, the Skaa are a defeated people.

Vin, a half Skaa/half noble person, street urchin and thief living in the capital city of Luthadal, is saved by charismatic, 30-something Kelsier from a deadly beating. Kelsier allows the talented but abused 16-year-old Vin to join his thieving crew for an impossible job - to steal Atium, a exceedingly precious metal, from the Lord Ruler himself.

Vin learns from Kelsier that she is an allomancer capable of swallowing metals and then "burning" them to allow her to use various and amazing attributes. Kelsier teaches Vin that she is able to "turn on" each individual metal and access its unique ability. Only those of noble blood can be allomancers, and most allomancers can only burn one of the 10 metals. These are called Mistings. Vin discovers she is a Mistborn and is able to burn all 10 metals, making her very, very dangerous.

The wary Vin finds Kelsier's thieving crew is different from any she has known. Not only are they Mistings, but the gentleman thieves actually seem to care for each other. All thieving crews she had known were the kill or be killed kind. A crew that trusts and respects each other is beyond Vin's ability to understand.

As the Mistborn Kelsier further details the "job" to his crew, it becomes apparent that this isn't going to be only stealing the atium from the Lord Ruler. It will involve the downfall of the Empire and possible death of the Lord Ruler, believed by almost everyone to be "A Sliver of Infinity."

This job will start a Skaa rebellion.

Can the impossible be possible? Can the Skaa be freed from the evil reign of the Lord Ruler? Can the Lord Ruler be killed? Can Vin learn to trust her fellow thieves in time? 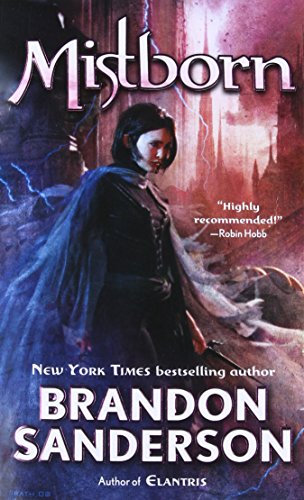 Review of "Mistborn: The Final Empire"

"Mistborn: The Final Empire" (2006, Tor Books, 544 pg.) by Brandon Sanderson is an exceptionally well-done fantasy. The first book in the "Mistborn Trilogy," Sanderson creates a fantastic new world where evil rules because good has failed. "The Final Empire" is a creative cross between "The Sting" and the high fantasy genre. From the incredibly creative and descriptive abilities of allomancy to the intricate and entwined details of the "heist," the book keeps readers engaged and usually on the edge of their favorite reading chair.

This book has little to critique. The writing is snappy and oddly cold befitting the environment of the Empire's capital city of Luthadel, yet at the same time exposing moments of humor and warmth. The characters are well developed and captivating. Kelsier and Vin share the duties of protagonist, but many of the characters get their moment to shine as the book's viewpoint switches occasionally from person to person.

The involved storyline is highly crafted and never feels false. The "magic" of allomancy makes sense, and Sanderson avoids the pitfall of many fantasy authors and stays within the limitations of allomancy rather than over-stretch its boundaries to create ways to save heroes from deadly situations. The limits of allomancy are an interesting part of the story line, and Sanderson stays well within his imagined world.

Humor plays an important role in the book, as Kelsier's jovial and yet deadly character affects all those around him. The light-hearted banter between the members of the thieving crew help solidify the feeling of a crew that loves and cares for each other, and it is also flat fun to read. Good humor is hard to write, and Sanderson does an excellent job of it.

The world of the Empire is well drawn in the reader's mind. The reader can smell the ash falls, see the red sun and see the plants colored shades of brown, red and yellow. Green plants, flowers, blue sky and yellow sun are only myths from before the thousand year reign of the evil Lord Ruler.

An exceptional fantasy, I would give "Mistborn: The Final Empire" a 9.5 out of 10. The incredible creativity, brisk writing and intricate plot make this book a must read for lovers of fantasy or heist books. The book would receive a PG-13 movie rating for mild profanity, heavy violence and mild sexuality. This book is written for adults.