Book Review: Monument To the Dead by Sheila Connolly

After a few misses, the fourth installment of the museum mysteries is probably the best so far.

In this installment, Nell Pratt reads an obituary regarding a former Society board member and since she didn't know Adeline Harrison all that well, she feels that the Society should send flowers even though Adeline hadn't been an active board member in the last few years.

Later in the day, she receives a phone call from Agent James Morrison of the FBI and invites her to have a drink with him after work. He tells her that he thinks Adeline's death is "suspicious" and wants to know if the Society has any information on the deceased.

Nell looks into his request after he tells her that another board member, Frederick Van Deusen of New Jersey had died under similar circumstances a few months earlier and he thinks that the two deaths may be related.

With Nell's hectic schedule, she receives a visit from Phebe Fleming from the Water Works regarding a proposal and Nell puts new hire, Nicholas Naylor on the project. She also gets an unexpected visit from Jacob Miller, from the Society's law firm.

A few days later, James tells Nell about the death of Benton Snyder, a member of the Edwin Forrest Trust.

As things become too coincidental, Marty Terwilliger, suggests to Nell that they talk to potential targets of the "serial killer" of the elderly.

After visiting Louisa Babcock, Nell leaves her number with the receptionist and since Louisa does not want to see anyone while she's temporarily at the nursing home, Nell does receive a call later that night. The night receptionist gives her a description of a young man who had wanted to see Louisa. Fortunately, his attempt was blocked by the note from the day receptionist.

As the pieces of the puzzle are coming together, James' life is in danger and Nell shoots the suspect with his gun and she agrees to help him mend during his recovery.

Although this isn't an edge of your seat thriller, the plot of the book was good (even though much of this series hasn't been what I've hoped for) I have to give Sheila Connolly credit for coming up with good plots. The only problem is they're not really executed that well (no pun intended).

One of the good things about this installment is a lot of characters aren't introduced and it's easy to keep track of who's who.

However, I'm still not liking Nell since she's wound pretty tight. She has too many issues that will eventually come out, but until you get to that installment, you'll just have to suffer like the rest of have or had. 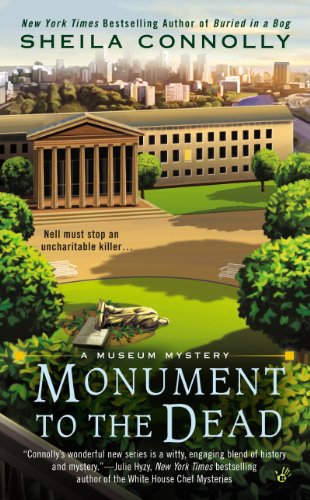 Monument to the Dead (A Museum Mystery Book 4)
Buy Now