Book Review: Murder After A Fashion by Grace Carroll

The title alone should make you scratch your head and say aloud, “huh?”

I’m not sure of the title, but in this final installment, narcissist sales clerk, Rita Jewel decides to take a cooking class with celebrity chef Guido Torcelli (because after one previous class she needs a refresher class) and when she goes to the cooking school months later, the chef surprisingly knows her name.

Per the general formula, Rita is the last person to see him alive and she once again becomes the primary suspect in a murder investigation.

This pretty much sums up the whole novel since the entire story is rehashed from the previous installments.

To put it simply Rita starts to do her own investigation, goes to the funeral and constantly drops designers in all of her conversations, while author Carroll drops designer names in her descriptions of the characters.

What really made my eyes roll was how Rita thought she was a close personal friend of the dead chef’s. The two interacted in the second installment and I don’t think a famous chef (in real life) would remember a student from six months prior.

Throughout this series there is no character development and during the time frame for all three installments, Rita keeps complaining about not having any friends. She doesn’t do anything to make improvements in her life and therefore you don’t care about her.

If you’re looking for a train wreck to pass the time, well, you’re in luck. 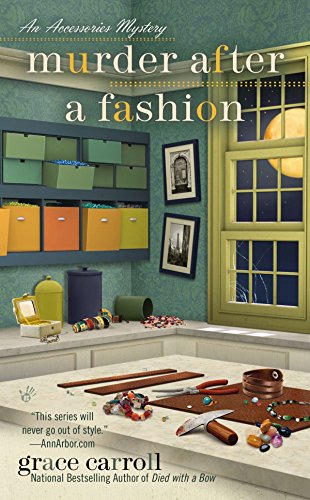 Murder After a Fashion (An Accessories Mystery)
Buy Now