Book Review: Off the Books by Lucy Arlington

Whenever you come to the end of a series, you have to ask yourself if sticking with it was worth it, or if it was a waste or time. For the Novel Idea Mysteries, it’s definitely worth your time.

From the beginning its a series that doesn’t run out of steam and the characters are easy to relate too, especially if you’re a writer moving to the next level.

As in the past, literary agent, Lila Wilkins has been tasked with a major event for the agency. This time around the agency will be sponsoring a week long bridal expo featuring authors along with bridal experts.

Lila is excited to showcase her new client, Lynn Werner, who has a promising career as a cozy mystery writer. That is until handyman Chuck Richards is found dead at the expo in what appears to be an exact scene from her upcoming book.

With yet another murder connected to the agency, owner Bentley Burlington-Duke comes up with the idea of trying to help the police find Chucks killer. She wants the agents to keep their eyes and ears open, but Zach Cohen, wants to make solving the crime a contest between him and Lila.

As the story progresses, dark secrets are revealed along with Lila’s bubbling below the surface feelings for Jude Hudson.

While this is the last installment of the series, the ending does set up the premise for another chapter in the series. Obviously it never came to fruition, but we’ll never know what happens to the characters.

Could another installment be squeezed into the series? Sure, but I think having the series end here is fine since the plots were becoming too predictable and each installment revolves around an event sponsored by the agency.

The downside however was that the other characters at the agency could have been featured mor, but to start featuring them in a somewhat bigger capacity in the last installment was a mistake.

In looking back, it would have been a good idea to have featured them early on, but as a reader I didn’t have a say in it.

But, if you are looking for a good series this should quell your thirst. 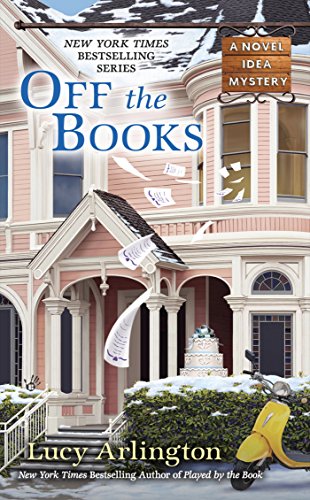 Off the Books (A Novel Idea Mystery Book 5)
Buy Now