Book Review: Privy To The Dead by Sheila Connolly

I'm not going to lie, but I lost interest when I hit page seven. You'll find out more later if you haven't lost interest in this column yet.

Grateful for all of Nell's help in the previous installment, local developer Mitchell Wakeman gives the Pennsylvania Antiquarian Society a generous donation to renovate the century old building.

For any non-profit, this is a dream come true and Nell can't wait to get started on the renovations.

During a clean out of the basement, the crew comes across a privy and Nell tells them to go ahead and clean it out. If there's anything that they find that may be of interest to the Society, she wants them to set it aside and anything else they can toss.

A day or so later, Carnell Scruggs is involved in an accident outside the Society. The only lead Nell has from the police is that Scruggs was last seen in a bar a few blocks away. He had been talking to the bartender when another man approached him. The bartender told him that he was showing off something that he had found while cleaning out the privy.

Nell tells Detective Meredith Hrivnak that she didn't know who the dead man was and can't help her out with the description of what he may have been showing to people at the bar.

Of course, they find a matching escutcheon while the staff goes through the debris from the basement.

As the story progresses, Marty is obsessed with finding documents pertaining to a lap desk that her great grandfather may have owned. It's not mentioned in any of the documents of her family's collection and she's trying to keep this a secret from everyone.

This seems to be a carry over from the fifth installment, since both subplots focus on events that had happened over a hundred years ago. I'm still not too sure about this whole story.

When my interest started to wane on page seven, it was due to the mentioning of Marty's boyfriend's name. When he was mentioned in the fifth installment, his name was Ethan. Now it's Eliot.

But, that's not the only thing.

Nell's assistant, Eric, somehow changes his last name from "Marston" to "Hampton" and when Nell is being questioned by the detective, she tells her that she and Marty were the last to leave the building after a board meeting on the night Struggs was hit. They weren't.

Because of the poor editing, that's why I lost interest in the book so early. There were a few other mistakes along the way, and I'm really shocked that Connolly didn't pick up on them.

Once again, Nell's character hasn't developed and another problem that I've had with her is that she likes to go to lunch all of the time. She and whoever else are always going to lunch and she's forever eating sandwiches.

As I've started in the next installment, the same problems seem to be cropping up and my interest level isn't there. Maybe it will change? 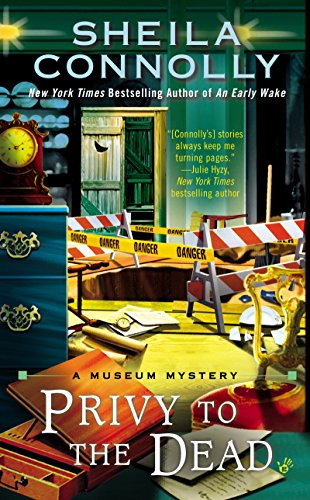 Privy to the Dead (A Museum Mystery Book 6)
Buy Now