I’m not sure, but I think this is probably the longest series that I’ve read and I don’t think the ending is in sight.

From a slow start, the series has maintained an even keel and happily only three movies are quoted in this installment. It’s a major improvement over the debut when it seemed like every page had a movie quote.

Anyway, Angie and Tate Harper are settling into married life, while Melanie Cooper is adjusting to being newly engaged and living with fiancé Joe DeLaura (Angie’s brother).

Melanie needs to meet with local artist Rene Fischer-Klein on what cupcakes the glassblower ants for the opening of her upcoming project. Prior to the meeting, Rene’s husband, Peter, tells Melanie that he’s concerned about her health, but Rene just blows him off.

Concerned, Melanie doesn’t know what she should do and goes ahead with making the cupcakes Rene suggested.

The day before the opening, Melanie and Angie go to the studio when they hear that someone died at the gallery. They learn that Rene has died of a heart attack. But did she die of natural causes?

As Melanie learns more of her friends death, she also discovers that she doesn’t know her friends as well as she thought.

There are no problems with this installment but I didn’t think there were enough clues to figure out who the killer would end up being, and the characters have definitely grown.

The one problem that I do have is I can’t remember if Rene and Peter were introduced in an earlier installment. 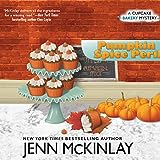