Second Serving of Ice Cream is Twice as Deadly

If author Wendy Lyn Watson woke up a little sore after I finished her second a-la-mode mystery Scoop to Kill then she deserved it.

It's been a few months after the death of Brittanie Brinkman and while the town of Dalliannce has gotten back to normal things are running smoothly at the annual Honor's Day festivities at Dickerson College. That is until Tallulah "Tally" Jones' niece Alice discovers the body of graduate student Bryan Campbell.

English professor Emily Clowper emerges as the main suspect since Campbell was suing her for sexual harassment. After being banned from the campus she enlists the aid of Alice to help her get her computer files. The seventeen year old is more than happy to help out one of her favorite professors, but after she gets the files, Emily discovers that a grant spreadsheet is missing.

Tally is a little jealous of the professor since she discovers that her former high school sweetheart, Finn Harper, and Emily go way back to the time when he was a reporter in Minneapolis. It's fairly obvious the two had a fling during those days and Tally's still trying to figure out her feelings for Finn.

With Bryan dead the list of suspects grows and he, like the late Brittanie, didn't have many friends due to his actions. He was the nephew of Detective Cal McCormack who has always had a major crush on Tally (you know friends while little kids and then as they grew up he started crushin' on her) but she never returned the feeling since she was madly in love with Finn.

Putting the romance aspect aside Finn, Tally, Alice, Bree and Kyle (who has a major crush on Alice and is the only non family member working at Remember the A-la-mode) along with Emily try to figure out who would want Bryan dead.

Since a few months have gone by since the murder of Brittanie, Alice is nearing the end of her first year as a college freshman and while she's a professor favorite she was looking forward to being a TA for Emily.

Bree doesn't like the thought of Alice working with him and decides that she should enroll in the class, but has Tally do it instead since Bree doesn't have a high school diploma. This way both mother and aunt will feel comfortable knowing that Alice is safe once Emily ends up dead.

Usually in a series slight references are brought up regarding the previous work and generally authors don't dwell on the past, but in order to connect this book to the debut of the series, Watson brings back perky Ashley (only not as perky) who works at The Lady Shapers Gym and also Deena Silver and her daughter Crystal Tomkins since Crystal is now in the final stages of planning her wedding.

In memory to Bryan's life Cal and his sister and brother-in-law decide to set up a scholarship in Bryan's name and they hold a fundraiser at the college. Deena as the caterer with Tally serving dessert once again (a recipe for the ice cream cake is included at the end of the book, along with a recipe for a signature milkshake that Tally creates for the wedding instead of a grooms cake).

After the murderer is discovered (ha ha WLW I'm two for two) the ending shifts to the wedding and here's were I hope you felt the pain of waking up this morning.

Cal has confessed his lifelong love for Tally and Finn has said that he's going to leave town once more. As a cliffhanger, Tally's dancing with both men and she grabs the hand of the man that's most important to her at that moment.

It's a good cliffhanger and while there's still a little summer left, be sure to check out the recipes. 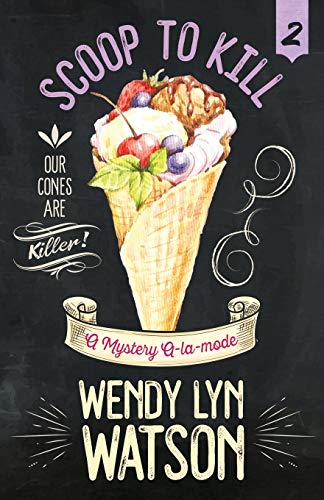