Nothing to Lose Your Head Over

Mysteries are supposed to start out with a bang and Laura Childs really get's the action going in Stake & Eggs.

While a snowstorm is raging outside the Cackleberry Club Cafe' (owned by three friends- Suzanne, Toni and Petra) the women are startled when the hear a two snowmobile's and then a crash outside. Suzanne goes outside and stumbles across the body of Ben Busacker, the ruthless president of Mills City Banks. She swears she heard two snowmobile's and doesn't know where the other went.

Back inside she tells the other two women of her gruesome discovery and the stage is set for Suzanne's amateur sleuthing.

There's a lot they have to put up with during the coming week. They have the town's Fire and Ice Festival and Toni has decided that she's going to win the $3,000 prize money for the first ever treasure hunt. Of course she needs Suzanne's help in figuring out the clues.

As the week progresses, Suzanne is nearly run down by a mysterious snowmobile while helping Toni figure out a clue, she finds a runaway boy in the cafe' and has to listen to the former prison warden tell her how he's going to become the new president of the bank and what his intentions are.

The Cackleberry Club Cafe' Mysteries is a good series to get into. Child's gets right to the point and knows how to keep the pages turning. There's always a good list of suspects and usually a surprise ending. I've been stumped a few times myself and had an inkling that it was someone other than the killer this time, but I was wrong.

If you're inclined to pick this or any of the other installments up, do yourself a favor and don't read on an empty stomach. These characters cook and bake throughout and you're bound to get hungry. There's also some recipes at the end for your noshing pleasure. 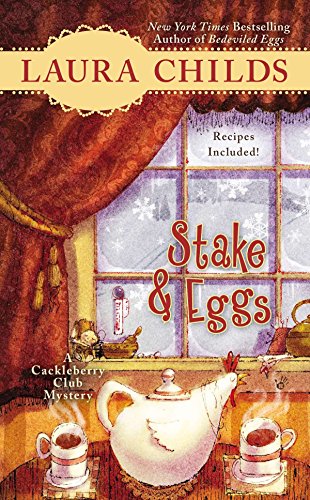