Now that some parts of the northern hemisphere are starting to thaw, I thought I'd review something "springy." The Azalea Assault makes you wish the possibility of snowstorms were still capable of happening in May.

For first time novelist Alyse Carlson, negative reviews are something you don't want. Unfortunately, there's really nothing good about this book.

The first mistake Carlson makes is introducing too many characters. If you do read this be sure to keep a scorecard as to who's who. There were many times I found myself scratching my head as to who the characters are.

Revolving around main character, Camellia (Cam) Harris, the public relations contact of the Roanoke Garden Society, Cam is ecstatic that famous photographer, Jean-Jacques Georges is shooting a spread for a national magazine for garden lovers. The garden being featured belongs to her boss, Neil Patrick. Yes, I did catch myself trying not to add "Harris" after the character and he has a dog named Barney.

So, Jean-Jacques is found murdered in the Patrick's garden following a cocktail party and the list of suspects begins to grow (no pun intended since this is a gardening society mystery). Cam hires her best friend, Annie to take the photos which seems to take about three weeks.

Annie becomes a suspect and now its up to Cam, Cam's sports reporter turned investigative reporter boyfriend Rob and his friend detective Jake Moreno to figure out who offed the photographer. Cam's brother-in-law is also under suspicion.

I've instituted a "new policy" when it comes to reviewing. If after fifty pages I find myself losing interest I'm done with the book. For some reason, I couldn't put this hot mess of a book down.

Since I'm not a gardener (plants come to my house to die) I thought I'd at least learn something about gardening or pick up some type of tips.

I didn't learn a thing. 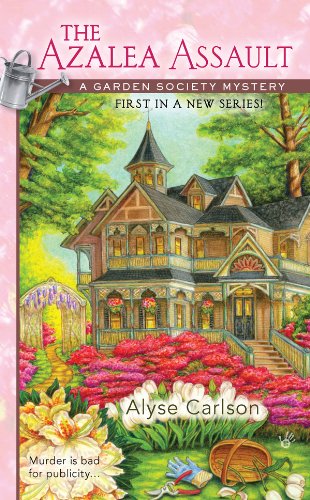