Book Review: The Sword of Shannara by Terry Brooks

Once again, the Four Lands are in deadly peril. The Warlock Lord has returned to power and threatens all good in this post-apocalyptic Earth. Allanon, the mysterious druid, seeks out the last of the House of Shannara, Shea Ohmsford - a half human/half elf living a quiet life in the town of Shady Vale - to wield the Sword of Shannara against the Warlock Lord.

In the meantime, the Warlock Lord has gathered his massive dark horde army to march against the people of the Four Lands. Shae and his companions set out to discover the whereabouts of the magical Sword of Shannara and begin the quest to battle the hordes of the Warlock Lord. But can Shae figure out how to use the strange power, or will he, too, fail to destroy the Warlock Lord like his famous ancestor - the Elven King Jerle Shannara?

Have you read any of the books in the Original Shannara Trilogy?

Order "The Sword of Shannara" in Paperback 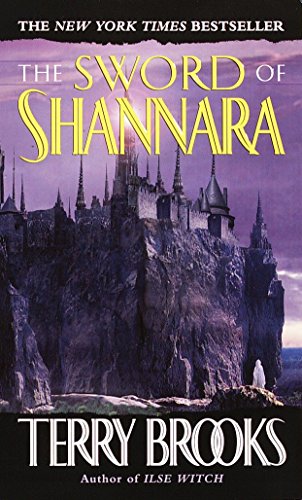 Review of "The Sword of Shannara"

"The Sword of Shannara" by Terry Brooks is the first book in the Original Shannara trilogy. Published in 1977, the book and the trilogy have become mainstays among fantasy readers.

"The Sword of Shannara" offers intense action, close friendships, romance, vast imagination and more. The fantasy world created by Terry Brooks is easily drawn in the reader's mind, and the constant action keeps the reader turning the page to see what will happen next.

While the book definitely delivers in action and the usual imaginative fantasy elements, it reads very much like a re-imagined "Lord of the Rings" trilogy. The similarities are striking. The main character seems to lack the strength to carry out the quest demanded (Shea vs. Frodo). A magical talisman (sword vs. ring) must be taken into dark lands ruled by an evil power (Brona vs. Sauron). A company is gathered to help the weak main character complete the difficult quest at hand. A strong, wise magical figure (Allanon vs. Gandalf) is present to guide and direct the company. The company eventually splits as the main character finishes the quest while the other members of the company go to fight the evil army. These and more similarities can be found.

Another downfall to the book is Brooks' reuse of words and phrases. This constant revisiting of terminology can become distracting, but the story line is so compelling that it can be overlooked in the desire to find out what happens on the next page.

However don't let the similarities to LOTR or lack of vocabulary keep you from reading "The Sword of Shannara." This new world created by Brooks is filled with wonderful, original characters and concepts. The character of Allanon, who also appears in the other two books of the trilogy, is multifaceted and engaging. Brooks does a superb job of making Allanon a true enigma.

As this is one of Brooks early books, it does lack the depth of character development that the last books in the trilogy provide. The main character, Shea, feels a little under-developed, as do some of the other members of the company. But the character development of Minion Leah shows what Brooks is capable of, and more of that can be found in the next two books of the trilogy.

I give "The Sword of Shannara" 7 out of 10 stars. Because it is the first book in the trilogy and the following books are better, I strongly recommend this as a good read for any lover of fantasy or imagination. Then you can dive into the next two wonderful books in this trilogy. I would give this book - and the entire trilogy - a PG rating on violence alone as the book contains no vulgar language or overt sexuality.

To read Agilitymach's review of the second book in the trilogy, "The Elfstones of Shannara," click here.

To read Agilitymach's review of the third book in the trilogy, "The Wishsong of Shannara," click here