In the summary for this review, I should have just indicated it was the third installment with the question of Why?

Maybe I’m a glutton for punishment, but, in all honesty, I hoped (again) that maybe this installment could change things around, but it continues to go downhill.

Author Janet Bolin had another great idea, but blew every chance to redeem herself.

The day before, a skeleton was found at another work site. It was believed to be that of Snoozy Gallagher the former owner of the Elderberry Bay Lodge.

Again Willow’s property becomes a crime scene and you would think that this would be the plot of the book. You would be wrong.

Most of the town becomes ill at a festival, a mysterious couple arrive in town and Willow is finally asked out by Clay to the opening of the new Elderberry Lodge (and hoping to make a love connection between Willow’s best friend, Haylee and the new lodge owner, Ben).

Since I seemed to be scratching my head more than usual, I was afraid that maybe I had gotten fleas from the abandoned kittens that were outside In Stitches.

How I managed another trip to Threadville is beyond me, but whenever the characters actually had more than two paragraphs of dialogue there was a faint spark of hope.

It was very faint. 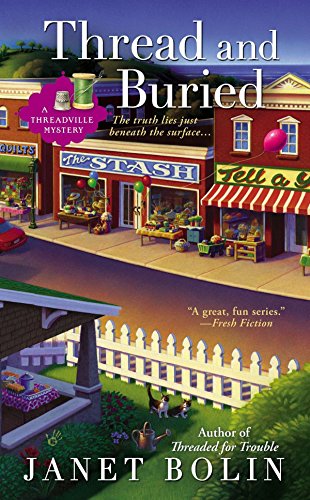