Book Review: Town in a Cinnamon Toast by B.B. Haywood

As Candy Holliday and her friends prepare for the upcoming wedding of Maggie Tremont and Herr Georg Wolfsburger, their best man Julius Seabury is laying dead in one of the archive rooms at the English Point Lighthouse and Museum.

Since he hadn't made it to the dinner party thrown by the happy couple, Candy decides that she'll go off looking for him and she in turn finds the body. After looking around the room, she discovers that he was bludgeoned by a champagne bottle, not just any old bottle, but one of the imports that Herr Georg has ordered for the party.

While Candy is detained at the museum, Maggie begins to worry and as she's wandering around the back of the hotel restaurants kitchen area, she too discovers a body laying on the flow. Ironically, he too was struck with a bottle.

It's learned that the second victim is Scotty Whitby, a waiter who comes from one of the prominent families of Cape Willington. During the night of observation at the hospital, he disappears which has the whole town looking for him.

Maggie is torn about the wedding and is convinced that Julius would want her to go through with it since there were a lot of preparations that were made. She agrees to continue with it and hopes that the final preparations will clear her mind.

Meanwhile, the subject of missing deeds comes up which Candy starts to look for. It was rumored long ago that there were some secret deeds which would cause chaos in the town if they were ever discovered. Candy suspects that Julius was murdered because of these deeds and he was getting close to solving the secret behind them.

As Candy sets off to clear her name (as she's once again suspected of being the murderer) Herr Georg goes with her as they seek the truth. He, too, wants to clear his name since it was one of his champagne bottles that ultimately took his friends life.

While investigating, the two learn the meaning behind "Foul Mouth" and learn other facts about the other prominent families in town and what secret is "Foul Mouth" hiding?

Overall, the book is just okay and a big let down from the sixth installment.

Each of the installments have been connected in some way, which after not reading these last three installments in years, can be confusing. It's best to start at the beginning and then follow them through.

This installment began as a subplot in the second installment of the series (https://hubpages.com/literature/Book-Review-Town-in-a-Lobster-Stew-by-BB-Haywood) and subsequently pops up throughout. So, again, if you are interested in the starting this series, start at the beginning.

Once you're done with the book, you'll find cinnamon related recipes and a column from Candy regarding gardening tips (if I had a green thumb, maybe it would help me but I did find them to be helpful).

I'm not sure why there was a need to do a character list and then end everything with a "preview" of the first two chapters of the first installment.

If you've read this far into the series, wouldn't it just be a waste of time to go back to the beginning? 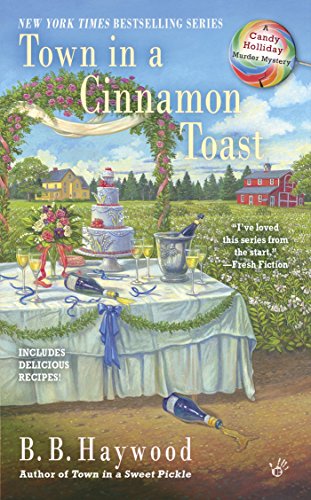