Book Review: Town in a Sweet Pickle by B.B. Haywood

I would have to say that I've been pretty lukewarm about this series, but in this sixth installment, I think this is the best out of the series and proved to be quite a fast read.

Unfortunately, it's been a few years since I had read the last installment and trying to remember the characters was a little maddening.

Having looked up a past review, I noticed that the previous installments had all taken place during some type of festival and this installment is no different. However, it's not a festival but a cook-off among the local residents in preparation for the town's newspaper's bicentennial.

Acting interim editor Candy Holliday and Community Correspondent Wanda Boyle have come up with a unique way of celebrating the Cape Crier in all it's 200 year history by publishing an upcoming special paper and also announcing the winners of the paper's first ever cook-off.

They've invited popular regional cookbook author Julia von Fleming to be a judge and on the day of the cook-off, Candy's worried that Wanda hasn't shown up for the festivities.

Wanda doesn't make it since she's at the hospital after eating a poisoned pickle from a jar that was left on Sally Ann Longfellow's back porch. The first death in this story is Cleopatra, Sally Ann's goat who also had a pickle.

When another jar of pickles from the long ago closed Sweet Pickle Deli shows up at the gymnasium, Ned Winetrop can't wait to get his hands on one and Julia mentions that she's heard of the famous pickles. After Ned eats one, he drops dead and Candy quickly slaps the pickle away from Julia.

Over in a nearby town, Georgia McFee receives a jar in the mail and she too is tempted to indulge in the famous pickle.

With a growing body count, Candy and her father "Doc" become the prime suspects since they both handled the jar at the cook-off. Now Candy has to try and solve the crime while being followed by a mysterious figure throughout the Maine countryside.

The reason this installment is so good is that even though it's a crimozy, it leads a little toward a straight mystery with having three victims on the same day with the appearance of the tainted pickles. There's also a threatening letter that comes saying that there will be more victims in the future if the killer doesn't get what he or she wants, putting the town on edge.

I liked the fact that the town was terrorized by something that could possibly happen to random victims and in this installment, there was some added humor with Sally Ann and her dead goat.

Well, it was sad that the Cleopatra was murdered by a pickle, but half of the town hated that goat, yet they all came to her funeral. It was kind of sad reading about Sally Ann's loss and how her other goat was trying to cope.

As usual, there are recipes and a wrap up on canning from Candy. 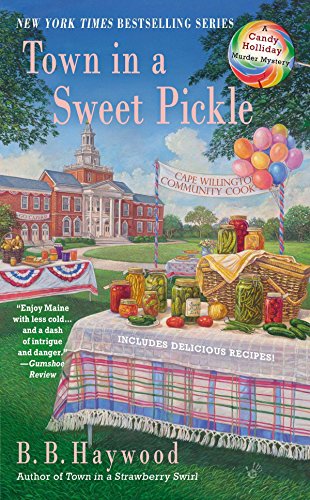