It wasn't too hard to say goodbye to this series as it really wasn't one of my favorites. There are a host of reasons why I wasn't too thrilled with it, but, I'm sure you can find those in past reviews.

As the haunting season begins, haunted houses are sprouting up all over and three of them are up for the town's official haunt spot. However, after the announcement that the Museum of Yankee Horrors wins the top prize, the next morning, event coordinator Liv Montgomery, stumbles across a vandalized scene.

Among the mannequins, the body of Lucille Foster (one of the judges) is found by a local actress (commonly known as the town's whack job) and Liv has to try to figure out a way to solve and hide the murder from Jonathon Preston, the director for a philanthropic organization.

Jonathon happens to arrive in town earlier than expected, much to Liv's chagrin and while she's known him from her past, she finds that the two have mutual acquaintances here in Celebration Bay.

Since his arrival was undetected by Liv, he tells her that he had been staying with one of his friends, Amanda Marlton-Crosby and her husband, Rod. The new witch in town, Yolanda Nestor, has ties to the both of them and she, along with fellow witches, are staying at Amanda's fish camp for their annual Samhain celebration.

With the events going on in town, Liv is afraid that she won't get the grant for the new community center and has to figure out who killed Lucille Foster and why. She doesn't want Jonathon to think the small tourist town is a haven for crime and once she's figured out who killed Lucille, it's time to catch a killer.

To begin on the plus side, Celebration Bay does seem like a nice little tourist town and everyone is neighborly. The problem that Freydont has with the book is there are too many characters and really not spending a lot of time with giving the reader clues.

Many of the scenes are long and drawn out and it wasn't plausible to believe that a theater group was rehearsing early on a Saturday morning. Maybe if it were a professional group, but this is a community theater group, so I doubt that anyone would be rehearsing at what I presume to be 8:30 in the morning.

I also think that there's some missing link with all of the entries in the series.

There are Kindle editions after two entries and while I don't own one, I therefore don't know what these two have to offer. However, I do think that they do offer somewhat of a continuation of the series, but I have no intention of going back and reading them.

The publisher in any promotional material never mentioned these stories so, I went by what I was given in the past to review. 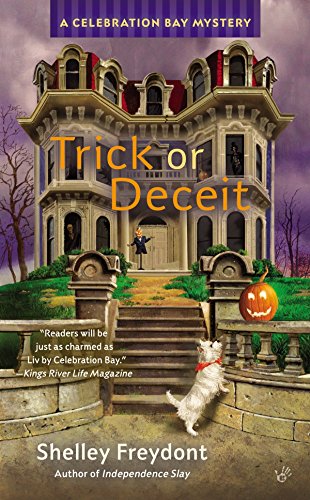