Book Review of New York Times Bestseller: Hotel on the Corner of Bitter and Sweet

Hotel on the Corner of Bitter and Sweet

Being a voracious reader, I usually check the Sunday Arts and Entertainment section for the New York Times Bestseller Books List in the newspaper. While I don't always agree that bestsellers are the best reading because many times books published by the smaller presses are overlooked. The books promoted by distribution companies like Baker &Taylor have the likelyhood of book reviews and Baker & Taylor is able to buy prime display space near the front and on the end caps in the larger book stores. That said, the lists are a good indication of what Americans are currently reading.

I am a historical hotel nut, so any book with the word hotel in the title will grab my attention. Hotel on the Corner of Bitter and Sweet, by author Jamie Ford, Ballantine Books, 2009, intrigued me from the first chapter. In 1986, the main character, Henry Lee, hears that during the restoration of the historic Panama Hotel in Seattle, the belongings of Japanese families who lived in the neighborhood before they were interred during World War II have been discovered stored in the basement of the old hotel. Henry attends the press conference being held with the new owner of the hotel, and he thinks that he recognizes a Japanese parasol that the owner holds up as an example of the stored items. Henry becomes obsessed with looking through the belongings for a mysterious precious item. The mystery of what the article might be and what it means to Henry deepens when the reader learns that Henry is Chinese, not Japanese.

Henry is a man in conflict struggling with the recent death of his wife Ethel, who Henry has dutifully cared for during her long illness. His relationship with his only son is distant and has become more distant with the passing of his wife, since he feels that talking about Ethel is the only reason that his son communicates with him at all. As the novel moves between the past and the present, Henry is honest about the strained relationship he had with his own father, so he doesn't hope for anything positive to happen between himself and his son. Henry isn't sure how to fill his time since he has taken an early retirement, as he has not had the time to develop new interests while caring for his wife. The assets he once had have been depleted by Ethel's illness. Now, having seen the old parasol brings back old memories and longings for Henry's first love, a Japanese girl named Keiko.

The theme of longing for one's first love and what happened to them over time is a universal one. What takes the novel several cuts above that of a love story is the backgrounds of both Henry and Keiko, the social climate of racial prejudice in the 1940s, and the fear generated against Japanese Americans during World War Two. The author includes several "negro" characters who have suffered their share of prejudice in America too. Included in background information for the novel's setting, are the early jazz musicians and jazz clubs in Seattle. A reoccurring question is, what does it mean to be an American?

What begins as a friendship at school between Keiko and Henry, two outsiders at their school because they are Asian students and scholarship students, begins to blossom into young love. Henry tries to keep their relationship a secret from his family because his father's loyalty is to China and all things Chinese. His hatred of the Japanese isn't personal, but it is rooted in historical events long past. Keiko and her Japanese family embrace America as their new country even in the face of America's mistrust that those of Japanese ancestry might be spies.

Hotel on the Corner of Bitter and Sweet 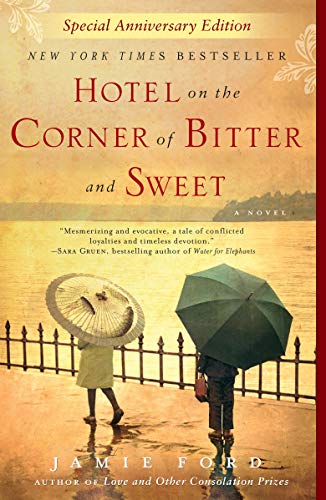 Hotel on the Corner of Bitter and Sweet
Buy Now

When Keiko's family is taken to an interment camp, Henry wants desperately to help them, but being so young, there's not much he is able to do. From this point in the novel, Henry faces many truths about himself and his family and Keiko as the events in the novel take some surprising twists. There's a sweet innocence in the writing style, but enough reality lessons and humor to keep the reader engaged in this wonderful book. Life truly is about finding the sweet among the bitter.

While I consider reading the end of the book before finishing it a scurrilous form of cheating, I confess to having to know if the Panama Hotel which served as a landmark between the actual Japanese and Chinese communities in Seattle in the 1940s was a real place. Indeed it is. The Panama Hotel was built in 1910 in the downtown Seattle area. The hotel was designed as a working class hotel by Sabro Ozasa, a graduate of the University of Washington. It's (sento) a Japanese communal bath house and tea house still exists. The Panama advertises it's facilities as a Bed and Breakfast Hotel that while lacking in some amenities, excels in charm and history.

Author Jamie Ford "struck gold" with his first novel Hotel and has had his second novel released in September of 2013, Songs From Willow Frost. In a recent interview, Ford was quoted as saying, "I'm part Chinese, part European, the chosen breed." His Chinese grandparents told him stories about the Wah Mee Club in Seattle's Chinatown where they met and eventually married. Their memories inspired him to choose the theme in Songs From Willow Frost where a 12 year old orphan is searching for his mother, who might just be a Chinese-American singer and movie star. Ford's third novel is in progress which was inspired by an incident in 1909 at the Seattle World's Fair.

Seattle Then and Now®
Buy Now