I've lived in Arizona for 69 years (Tucson, Glendale, and Sedona). I love writing about Arizona history, antiques, books and travel.

Have you ever driven past those crosses or memorials or shrines alongside of a roadway and wondered about those people who have lost their lives there? Sometimes there are plastic or real flowers and sometimes toys or balloons placed there. Sometimes there are small shrines containing the figures of saints. What were the circumstances of the accident? Had they caused the accident, or were they innocent victims? Who maintains those memorials for the dead? Most of us have questions or thoughts or perhaps even a small prayer for them, but in most instances, we simply drive past involved in the details of our own lives. In the novel, The Cross Gardener, by Jason F Wright (2010) we are introduced to the main character John Bevan who faces a number of issues about the death of his wife and unborn son who have died in an automobile accident. Throughout The Cross Gardener, thought provoking questions such as What happens in the exact moment of death, Is Heaven real?, Are our loved ones, near? Can they communicate with us, and the central question for each person who has lost a loved one: Why did this happen to me and my loved one? Finally, how does one face the reality of their loved one's death and move on with the business of living?

The story opens with the adult John Bevan's statement that he was born by the side of the highway after his mom was killed in an automobile accident. He never knew his biological father, however, John was adopted at age 5 by an orchardist of an apple orchard in Virginia. John is blessed with two other adopted brothers, one who dies in a swimming accident. There are stories related to apples and the work in the orchard and humor related to John's crush on Emma Jane, the only girl John ever loves They marry, have a daughter Lulu, and life is good, until Emma Jane who is pregnant with their son is killed in an automobile accident. Emma Jane. and the son are buried in a cemetery chosen by Emma's parents, but John places two roadside crosses at the site of the accident. The reality of the loss disables John to the point that he neglects his daughter Lulu, and leaves the running of the orchard to his hired men. His only activity is to leave Lulu with his in-laws so that he can spend countless hours by the roadside crosses to be close to Emma and his son Willard. Nothing seems important to John but being there. One day, he meets a man who is painting the crosses and John is so annoyed that this man is caring for the crosses and that he can't be alone in his grief. The man is persistent that his work is that of a Cross Gardener and that his joy is to care for the roadside crosses and other memorials. John is rude, but the Cross Gardener continues to return to the crosses and then he asks John for a ride to other memorial sites and crosses that he cares for. As John begins to talk with the Cross Gardener and takes him to other sites, he is amazed to learn how much the Cross Gardener knows about him and his family. He repeatedly asks the Cross Gardener who he is and where he is from. Is the Cross Gardener real? A ghost? A messenger from Heaven? An angel? The Cross Gardener only hints at answers to John's questions. Meanwhile, John's in-laws worry about their granddaughter Lulu who no longer speaks and has her own issues of grief to confront. The story covers the span of a year, and by the end of the book, the characters have all had to adjust to Emma's and Willard's deaths, and the true identity of the Cross Gardener is revealed. (The identity was not who I had expected, although looking back over the story, there were clues that I had missed.) 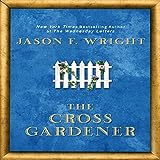 From the story line, many of the themes are obvious: death, grief, coping with the loss, and how to move forward into the future. Many of the concepts of life after death and what takes place at the moment of death have been constant debates for all mankind of all faiths during every age. While, the book explores many Christian themes, it isn't the traditional thinking of a void or limbo, or a Heaven or Hell or a reincarnation. For a few clues to what the author may have intended, I found out what I could about Jason F Wright on Google. Wright isn't a theologian or a clergy. He is an author of seven other books, and countless other editorials and articles for a variety of publications and newspapers. He's quoted as being a writer of political and social ideas. He does indeed live in Virginia with his family, thus the physical locations and details of life in rural Virginia in the book seem accurate. He is described as an American member of the Church of Latter Day Saints, which may or may not have had an influence on his concepts about life after death in The Cross Gardener.

One of the things I didn't like about the book was Emma was "too good." John's memories of her didn't include anything really interesting enough for women readers to identify with. John"s mother-in-law is given only one "real" passage of emotion where she openly shows her grief at Emma's grave. She is without doubt a good grandmother, wife and mother, but her life is focused on her family and picking fancy dresses for Lulu to wear to church. I think Wright's male characters have been given a better range of being real. Toward the end, I felt impatient with John's self absorption, but at the very end, I found myself shedding some tears of real emotion and joy for his discoveries. The overall message is clearly one of hope. I don't think I am alone in liking the book as Amazon Readers have rated The Cross Gardener as 4.5 out of 5 possible stars.

Book Review of Hotel on the Corner of Bitter and Sweet