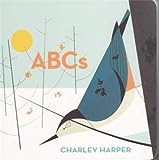 The late Cincinnati Ohio artist Charley Harper was well known for his pictures of animals and images of nature using a style he called minimal realism. His artwork has a graphic design quality that vividly depicts birds, amphibians, and mammals in their jabitats. His illustrations are reminiscent of the wildly popular children's artist Eric Carle, Gyo Fujikawa (Babies, Oh What a Busy Day) , and John P. Miller (I am a Mouse, 1964). If his work didn't actually originate in the era we now refer to as retro, I'd say his work has a pleasant, 1960s retro quality.

Charley Harper's graphic design-oriented artwork is appealing and playful. The children's book Charley Harper's ABCs (ISBN 1934429074) combines his wonderful artwork with large, Bauhaus-inspired san-serif font letters that are clean and metropolitan. I imagine it to be on the bookshelf of all the leading architects and fashion designers, as the lines and images are as clean, inviting, and visually stimulating as you might find in any art gallery in New York or London. Is a board book like this more appealing to a child, or to his or her parents?

Charley Harper, despite his talent, is an unlikely representative of high-style graphic design. He was a resident of Ohio and drew his inspiration from nature. The wooded hills of Ohio are surely a source of inspiration. However, Harper's sophisticated use of earth-toned color schemes, with colors like cerulean blues, gray greens, and ocher-tinged yellows, and simple lines and solid shapes is stylized and sophisticated--an unlikely pairing with the childlike themes one would expect in a board book. But it works! Harper used silkscreen as his creative method of choice. Make sure to view the fascinating video which shows how he created his works in this difficult craft.

Even though the pictures in this book will appeal to parents, it's colors and strong images will not be lost on young toddlers. I believe this book will eventually join the ranks of other great early children's books, such as the Very Hungry Caterpillar or the Grouchy Ladybug by Eric Carle, which are books that are as much works of art as they are books for children. Most children's picture books are 32 pages long. Charley Harper's ABCs exceeds this standard length and is a whopping 64 pages long. Impressive for an alphabet book.

This alphabet book is really an homage to Charley Harper's impressive art portfolio, but just because it really is art doesn't mean that the book is out of a child's league. Children have a natural affinity for simple beauty, and will enjoy this book as a fanciful picture book that shows appealing pictures of animals.

This book is an excellent and accessible introduction to Charley Harper's artwork, and will be an enjoyable addition to a young child's board book collection. If you like this book, you will probably also want to read a copy of the companion book, Charlie Harper's 123s, a counting book.

Charlie Harper's board books have the appealing quality of other children's books published in the 1960s, but thanks to Ammo Books publishers, these books are easy to find at online retailers today. This board book makes a child's first foray into the world of fine art whimsical and fun...and accessible.

Look for other Charley Harper products, including a calendar, a memory game (though this is hard to find), and a complete retrospective art book called Charley Harper, an Illustrated Life. This final book is thoroughly in the coffee-table books category, and not a children's book, but is worth mentioning if you are already a huge fan of Harper's work, since he was an artist first, and only a children's book author posthumously.

Join HubPages: Get Paid to Write

Artwork of Charles Harper from Little Golden Book of Biology

Other Art Books for Children

This short list doesn't do justice to all of the artistically rendered books for children on the market, but these are some of my favorites. Although not a book intended for toddlers or preschoolers, The Red Shoes, also published by Ammo Books, is also worth mentioning here because the art would inspire any child over age six who has ever had aspirations of being an artist herself.