Author Spotlight: Beverly Lewis -- Teaching Us About the Amish People

Beverly Lewis is one of the most beloved authors of Christian fiction today. With ninety books on her roster and no signs of slowing down, this petite former school teacher knows how to deliver one knock-out story after another and people just can't get enough.

Lewis grew up in the heart of Amish country: Lancaster, PA, and she writes about this people group almost exclusively. Her stories of the Plain people have struck a chord with readers world-wide, with translations into ten different languages.

Her accomplishments are impressive. In 2007, her book, "The Brethern" won the Christy Prize for contemporary fiction. The Christy Prize is the like the Oscar of Christian fiction writing. Two of her books have been adapted into movies: "The Shunning" and "The Redemption of Sarah Cain." She has also won many other awards and her books have sold over 10 million copies.

Beverly Lewis' the Shunning
This is a recent release by Sony Entertainment. A young girl struggles to keep the old ways when her heart is pulled in different directions.
Buy Now

Reasons for Her Success

Beverly Lewis credits her strong work ethic and discipline for her ability to write as much as she does. In this charming interview from TitleTrakk.com, Lewis says that she has a strict schedule and she sticks to it. Her writing career did not start out full time and she juggled a full-time music studio with part-time writing on the side while home-schooling her three special needs children.

And she did not come out of her mother's womb a best-selling novelist. Lewis did show early signs of great talent (dictating her first poem to her mother at age six) but she has still had to work hard to learn the craft. In the TitleTrakk interview, Lewis talks about the path she had to take to become the writer she is today. She started out writing magazine articles, reading books on writing and generally learning in any way she could. She sums it up as "being teachable."

Beverly Lewis grew up in the heart of Amish country, Lancaster, PA and saw first hand the people she writes about so much. She has also spent time living with the Amish, doing research for one of her books. Beverley also has a family connection to the Plain lifestyle. Her grandmother, Ada Ranck Buchwalter, came directly from Old Mennonite brethern stock but left the group when she married an outsider.

On the official Beverly Lewis website, Beverly says that she has received good feedback from members of the Amish communities who are surprised that she is so knowledgeable about their lifestyle. Some of the people have even requested that she portray their community, a very strong sign of endorsement.

According to an video interview done with the Heritage of Truth, Beverly Lewis now has ninety books to her name. Her are some of the series, given in the order that she recommends they be read. 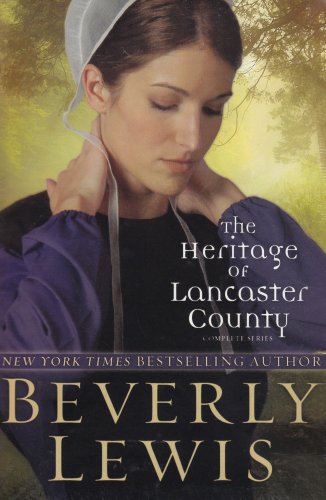 The Shunning / The Confession / The Reckoning (The Heritage of Lancaster County)
This is the first Amish series and the fiction books give an excellent overview of the Plain lifestyle. Can be understood by both adults and young girls.
Buy Now