Why do I love Issa? Because he was a lover -- not a romantic in the usual sense, and definitely not a seducer, but a lover of all life.

Whether about children or butterflies, people viewing the cherry blossoms in spring, crickets, stray cats, even house spiders: his haiku convey a whimsical tenderness without sentimentality.

Whenever people discuss traditional Japanese haiku they always seem to mention Matsuo Basho, who created the form, and his famous haiku about the frog jumping in the pond (that link will give you 30 translations!).

Basho is a great poet, and he created the profound idea of haiku as a way of life. Here is a wonderful quotation from him expressing that: "Real poetry, is to lead a beautiful life. To live poetry is better than to write it."

Nevertheless, I think that with all the emphasis on Basho (and his frog) people are missing out on other classic Japanese haiku poets. Reading widely in the classics can help us write better haiku ourselves, and I'll talk a little bit about that too.

I have been reading and writing haiku for more than three years now. I am constantly grateful and amazed by how many great haiku, classic and modern, are available on the web for free or easily availble on Amazon. No more waiting for interlibrary loan.

Lanoue's Favorites by Issa: Both Paperback and Kindle 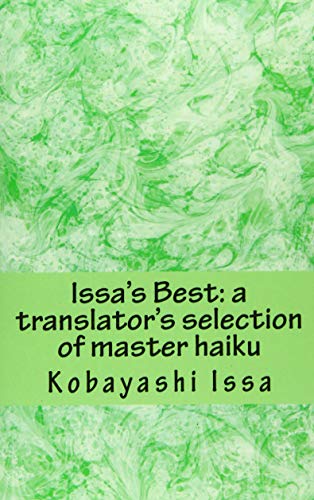 Kobayashi Issa (1763 - 1827), usually just called Issa, in some ways had a very hard life, losing his mother as a child, marrying late, and having his first wife die and all his children die as babies.

Still, he never lost his compassion, or his sense of humor.

picking mulberry leaves--
the baby on her back
stretches a hand

The poor mother must pick mulberry leaves to feed silkworms with no one to watch her baby, but for the baby it's a game. That one is translated by David G. Lanoue, who has a huge searchable archive of Issa's poetry.

Some of them are sad, like this one he wrote while caring for his dying father:

shooing flies too
today, as he sleeps
for the last time

Both of these are on the same page in Welch's internet anthology . . . I searched for flies!

Issa is famous for his haiku about little creatures that most of us overlook (like sparrows) or dislike, like stray tomcats.

not hushing up
for the nightingale...
sparrows
~ trans. Lanoue

One doesn't usually think of literary haiku as funny, but as you'll see in the video on the left, Robert Haas keeps the audience chuckling in a short reading of his translations of Issa.

His first one is the classic:

It always struck me as worth a smile, but reading it aloud in the right casual tone, Haas had the public television audience laughing out loud.

Some of Issa's haiku reveal an earthy sense of humor. The poet Dave Bonta has a thoughtful (and also hilarious) blog post quoting Issa's haiku about excrement, from migrating geese pooping on farmers' hats to a priest relieving himself in a field.

A good haiku is like a good black and white photograph. It shows the beautiful bones of things, and leaves the reader to supply the color. To put it another way, in the words of Denis Garrison classic haiku and tanka leave "dreaming room" for the reader.

What Can We Learn from Issa?

On the most basic level, we see from these fine translations that haiku in English do not have to have 5-7-5 syllables, as another hubber explains: "How to Write Haiku: Moving beyond 5/7/5"

Haiku do not have to reference the season directly: mulberry leaf-picking, butterflies, and stray cats in love are -- I think -- all late spring or summer themes, but "spring" or "summer" do not appear in them.

Maybe every once in a while haiku don't have to reference a season at all: Spiders in live in the corners of our houses in spring, summer, and fall, and with central heating, winter too.

What do Issa's haiku do?
As much as any poems I know, they show, rather than tell.
Issa does not say he was sad, fanning the flies away from his dying father . . . but we are sad.
Issa doesn't tell us that the baby and the butterfly are cute . . . but his poem makes us smile.

Issa's haiku show us that most good haiku have two parts.
Either they only contain two images, like the woman picking mulberry leaves and her baby reaching for them, or they contain one image and a human response to it, like "Don't worry spiders."

While many people tell beginning haiku poets to never to use personification -- and "crying rain" would be silly in a haiku -- Issa isn't afraid to imply human emotions in the little creatures around him, expressing his compassion for all beings.

As you read more haiku by Issa you will see how he brings his whole self and everything he sees into his poetry, simply, naturally, and from the heart.

That is why I love him.

And, if you want to try your own hand at haiku with expert advice, check out A Short Guide to Learning to Write Haiku: Some Great Links