Dr. “Wally” Broecker is no fan of large bureaucracies, which is why, though he is a “grand old man” of contemporary climate science, he has never participated in the International Panel on Climate Change.  Yet he can scarcely be called unconcerned about the issue of climate disruption:  it was Broecker who created the image of the climate “beast,” which humanity is now collectively prodding with the “sharp stick” of greenhouse gases.  This concern also explains how it was that Broecker became both subject and co-author (with science writer Robert Kunzig) of  Fixing Climate:  What Past Climate Changes Reveal About The Current Threat—And How To Counter It  (2008, Hill and Wang.) 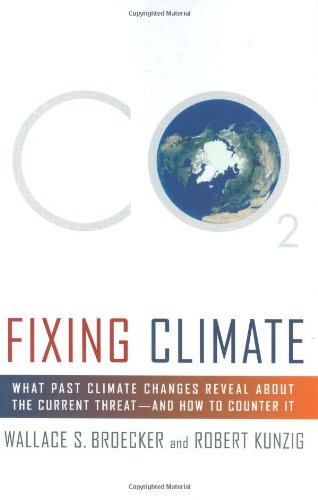 Fixing Climate: What Past Climate Changes Reveal About the Current Threat--and How to Counter It
Buy Now

Fixing Climate weaves together scientific biography and science reporting in an engaging, if sometimes slightly elliptical manner.  Opening with a biographical sketch of Broecker—who, we learn, was born to an Evangelical suburban Chicago family, and initially drifted into his scientific vocation via a summer job in a radiocarbon dating lab—the book explains the currently-accepted Milankovitch theory of Ice Age glaciation; proceeds to an account of the Dr. David Keeling’s measurements atmospheric CO2; continues with a summary of research work on glacial ice cores, sediments, and fossil pollen from around the world showing startlingly abrupt prehistoric climate changes; and moves on to the possible consequences of continued warming, closing with an account of the prospects of removing carbon dioxide from the atmosphere.

Of course, this outline leaves out most of what makes the book special.  Each large topic contains vivid sketches of the people involved, as well as much detail about the scientific issues, evidence and ideas.  For example, chapter ten, “Ice melts, sea level rises,” discusses the disappearance of tropical mountain glaciers, estimates of sea level rise in the present century, estimates of its costs—the EPA estimated in 1991 that a one-meter rise would cost the US alone between $270 billion and $475 billion—evidence of past oceanic high-water marks and glacial extents, the dynamics of ice sheet disintegration, the thermal expansion of seawater, icequakes and meltponds, ice mass loss and gain in Greenland and Antarctica, the ozone hole, and the existence and significance of “marine ice sheets.”  All that, readably, in twenty pages!

In each case, we learn something of the research that garnered the knowledge we possess—and often, something about the personality of the researcher, too, whether Lonnie Thompson, trekking Peruvian glaciers to measure their vital statistics, or John Mercer, who was occasionally known to do geological fieldwork in the nude—though presumably not for his best remembered research--studying the West Antarctica Ice Sheet.

For many of the older researchers, we get a sense of how their initial attitude of intellectual curiosity shifted to an attitude of concern.  This shift is understandable:  in the late 1950s researcher Gilbert Plass noted that global warming could be become a problem "in several centuries."  Nobody forsaw the explosive growth in emissions that took place over the last half-century.

Fixing Climate is a tonic for anyone who may have feared that climate science is just a matter of climate models constructed in ivory towers.  We read of many expeditions to gather data—from a young David Keeling taking water samples from rivers from Big Sur to Chincoteague, to Taro Takahashi doing the same from Atlantic depths of up to three miles, to Scott Stine tramping the Owens salt flats of California to examine prehistoric stumps, and to George Denton helicoptering in to collect data from remote New Zealand glaciers. Climate science has thrived on data from the real world, and much of it has been hard-won indeed, as the photos included in this review will attest.

It is in the last four chapters that the book really justifies its title. Kunzig and Broecker are deeply pessimistic that reductions in greenhouse gas emissions alone can hold warming to acceptable levels, and in Chapter 13, “Green is not enough,” they explain why. In a nutshell, they feel that so much work is required to alleviate human misery around the globe that the economic growth needed will likely outstrip our efforts to use energy more efficiently and to produce it more sustainably.

From this pessimistic assessment, Broecker and Kunzig proceed in their final three chapters to assess methods of removing carbon dioxide from the air, methods of storing it safely underground or in the deep ocean, and the economics and morality of  doing so.  There is a particular focus on the work of Klaus Lackner and a start-up, Global Resources Technology, who have developed “synthetic trees.”  These devices scrub CO2 from the air for storage at a current reported price of about $30 a ton.  The intention is to use this technology to offset emissions by sources such as airplanes or automobiles, for which scrubbing technology is unlikely ever to exist.

Further in the future, as our understanding of the intricacies of climate systems grows, such technologies may also open the door to a degree of actual control over climate.  Rather than poking away with Broecker’s “sharp stick,” we might then actually have a crude set of reins for “the climate beast.”

"Tip of the hat, wag of the finger"

For the reader wishing to explore the state of the research today, Fixing Climate is an excellent source—it tells us what is known, what is under investigation, and especially, what it takes to find out how climate works and how we are changing natural climate processes.

To be sure, there are points one might question. Is the degree of pessimism about emissions mitigation merited? (The discussion about wind power in particular seems uninformed, seriously understating potential capacity and overstating the potential for climatic impact of widespread wind power by “slowing winds substantially”—which simple math shows not to be a realistic concern.) Also, why is there no mention at all of the potential of using biochar techniques to sequester organic carbon safely in soils, while at the same time enhancing their fertility and ability to hold water?

Yet the book’s strengths overall far outweigh such quibbles. It is vivid, substantial, and engaging—probably as comprehensive as a work for the general reader can possibly be.  Heartily recommended.

This book connects with a great many topics, and there is fascinating material available all across the web. Some of the sources that I encountered in writing this page are given below, with brief descriptions.

First, though, I mustn't forget to mention that you can find my other hubpages here:

(Report on the potential of wind power)

(A page of the potential of biochar for carbon sequestration)