Colorado Jackalope and how to hunt them safely

Inspiration behind this article

I was driving down Highway 36 heading to mountains to photograph the amazing wildlife that wanders the rich meadows and listening to KOA 850 talk radio, there was a news alert about two Jackalopes hunters that were maimed in northern Colorado the day before. Cursing the radio as I do often I started to calm down and realized that not everyone is an expert on the elusive Jackalope as myself and maybe they just did not have the proper training to go after this dangerous breed. Most people do not know how unpredictable and perilous the Colorado Jackalope can be compared to the mythical Wyoming Jackalope. (Folks from Wyoming due to heavy drinking in their isolation have nothing to brag about in their desolate state so they have chosen to make up their own stories involving a Wyoming Jackalope. Jackalopes are not native in Wyoming and anyone that can Google know this.)

Seeing a need for some public education about this risky and precarious breed of Colorado Jackalope I have decided to write this informative article to understand the Jackalope and hopefully give the reader some insight how to hunt them safely.

This photo was taken just seconds after a Jackalope was spotted in the South Park area proving once again how elusive this animal can be.

Do you know anyone every killed or maimed by a Jackalope in Colorado?

A little know known fact in Colorado history was that the British were exploring Colorado long before the Spanish conquistadors. In the video you are about to view (WARNING: FOR MATURE AUDIENCES ONLY) is a film that has been lost to history for countless centuries and was just last year found in an archaeological site on Mount Evans, Colorado.

This film is the missing link and depicts what happened to the "The Lost British Patrol" that was never heard from again while exploring Colorado's high country. The loss of these highly trained British soldiers is what prompted the British Empire to give up in their quest for gold in what is now present day Colorado.

The white Jacklope is this film has shed his antlers and shows how menacing and deadly these animals can be even without their antlers.

Last film made by "The British Lost Patrol"

What is a Jackalope?

Folklorists of early Colorado have often spoken and told stories of these mysterious creatures. A Jackalope is a freak of nature which has combined the DNA of a jackrabbit and an antelope with the attitude of a grizzly bear and only found in the high country of Colorado.

Stuffed and mounted, Jackalopes are found in most Colorado bars and even in bars across the United States. Jackalope postcards and other paraphernalia can be bought almost anywhere in the state of Colorado. The famous Jackalope has appeared in published stories, poems, television shows, and video games.

Have you ever seen a Jackalope outside of Colorado?

Photo taken during my very first Jackalope hunting adventure. That is me on the far left in the typical green hunter shorts worn by Jackalope hunters.

Hunting Jackalopes in the fall only during the regular deer and elk seasons has given Jackalope hunters extra and expanded opportunities to bag these elusive animals.

HOW TO GET A JACKALOPE HUNTING LICENSE: You must first pass a hunter safety course given by the state of Colorado. You must also pass a Jackalope awareness class on how to spot and identify the animal so you will not mistakenly shoot a common jackrabbit or an antelope out of season. You must also demonstrate the ability to count to 25 without the use of any aid such as a calculator or your fingers.

WHEN YOU CAN HUNT JACKALOPE: You may hunt Jackalope anytime during the regular deer or elk rifle season. Due to the nature of how dangerous a Jackalope can be there will be no archery season this year. The Governor has put a halt to the archery season because of the record number of Jackalope archery hunters killed and maimed last year and will take it under advisement for the following year.

WHERE YOU CAN HUNT JACKALOPE: You may hunt Jackalope in any unit(s) in the high country that have available licenses. They will be limited, so apply early. You must use your Jackalope license on private land only if your deer or elk license is for private land only. 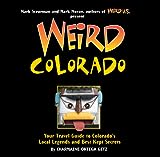 I almost got a photo of a Jacakalope on this hunting trip, missed it by several minutes.

Understanding Jackalope behavior gives you a better chance of hunting one of the most dangerous and elusive Colorado animals and getting your trophy but also surviving.

The key to hunting Colorado Jackalopes in the autumn is to know and understand that the Jackalope physiology and behavior. Jackalopes dramatically change in mid-August. Jackalopes enter a period of hyperphagia, or feeding frenzy. More importantly, they change their diet. Where leaves and flowers of broad-leafed plants and insects had dominated the summer diet, Jackalopes switch to an autumn diet of red meat and have been known to down a full size mature elk and devour it within a couple of hours. Often Jackalopes make migrations of 20-30 miles from their summer range to traditional fall ranges in search of red meat that they need to sustain them during their winter long hibernation

Fellow biologist studying a Jackalope who they believed was nesting in a tree.

The location of Jackalopes is highly predictable during the autumn. Second, where you observed Jackalope activity or rumors of sightings in midsummer are irrelevant. Keep in mind you are hunting and pursuing an elusive animal that may have a home range of 20-200 square miles, and can travel 20-30 miles in search red meat that it needs for its winter hibernation.

Best Jackalope hunting success can be found in the autumn in areas with abundant red meat such as areas that have huge elk and deer herds. If you spot a herd of elk or deer look to the edge of the meadows just inside the tree line and you may spot the predatory and elusive Jackalope watching and waiting for its chance to down one of the unlucky members of the herd.

Jackalopes are like us in many ways; they travel the paths of least resistance during long trips, so scout natural passes and game trails. And follow the large game herds such as elk and deer. Jackalopes are elk and deer natural enemy and predator.

Care of the Jackalope meat and pelt

So after reading this article which has given you the best chance of bagging your trophy Jackalope and hopefully the ability to survive your deadly encounter. It is now time to take care of the meat and pelt.

The heavy autumn pelt and fat layer of the Jackalope needs special attention. A Jackalope should be skinned immediately after death to cool the carcass. Thick layers of fat should be removed. Even in the cool autumn nights, the pelt and fat will insulate the meat and spoil the meat. The pelt and meat should be refrigerated as soon as possible. If you plan to have a Jackalope rug made or a head mount, it is always advisable to consult your taxidermist before the hunt for specific instructions on Jackalope pelt care.

After reading this article have you decided to try your luck in hunting the elusive Jackalope?

My buddy Jason and I after almost bagging a trophy Jackalope

It is hope that my expertise in this article have given you the knowledge and insight into the very elusive Jackalope and will make your hunt a successful one and that you and your hunting buddies come home alive and not maimed. Remember do I as I do and take your cameras with you on this hunt for that once in a lifetime photo of this mysterious animal.