Starting in 2008, Marvel Studios has created some of the most popular and entertaining superhero films in history and it began with Iron Man. Two solo films and one Avengers teamup later, the character is still going strong and his movies remain the highest grossing of their films. But which comic stories influenced this phenomenon?

The Iron Man movies are much more fluid in regards to how they are influenced by the comics. They're more faithful to the genre, but they don't bring direct adaptations of stories to the screen. Whereas Batman Begins and X2: X-Men United where they're inspirations on their sleeves, the Iron Man trilogy requires bit more digging.

If you've come away from the Iron Man movies and are looking for the comics that feel most like the trilogy, here are the best recommendations. With fifty years of history, it can be a bit daunting, but these stories stand out and will have elements new readers will find familiar with the movies.

This is where it all began, back in 1963. Tony Stark, a weapon's manufacturer, travels to the Viet Cong only to be injured and captured by the local resistance. In his captivity, he meets a scientist named Yinsen, who helps keep the shrapnel that is closing in on Tony's heart from killing him. Together, the two create the Iron Man armor and Tony escapes to become the world's newest superhero.

This origin story remained mostly untouched be the films or, at least, in the important elements. Outside of the locale changing from the Far to the Middle East, the first Iron Man movie's first act is a retelling of this same tale. It was a smart move, since Tony Stark's origin is a pivotal element to his character and latter stories.

This comic is old school in many ways, it's a classic four color superhero story in a newborn Marvel Universe. Stan Lee was a great creator, though never the best writer. Still, for those looking to see how their favorite hero came to be, this is the comic to start with.

Obadiah Stane has taken Stark Industries from Tony and now our hero must reclaim it. Taking place after Demon in a Bottle, this story takes place right after one of Tony's lowest points. He's still recuperating from his alcoholism, he needs to regain his friends, and Obadiah seems to have it all planned out. When the final battle comes, it's not just Stark against Stane, but Iron Man against the powerful Iron Monger.

The character of Obadiah Stane was a great choice to begin with for the Iron Man movies, even if he went through changes. Jeff Bridges looks like an exact replica of the comic book character and, when true colors are revealed, plays him almost with the same manner. The Iron Monger armor is also faithful recreation. In the comics, Stane is defeated by his own hand and it's a more impressive and shocking then the film's showing. It wouldn't have worked in the movies, specifically one that's an origin film for Tony, but Stane's death in the comics is an important element to the character.

It's not a bad story, either. Iron Monger is really only present for the last issue, while the ones leading up to it are slow progressions to the ultimate showdown. I felt a antsy reading this, waiting for the two characters to challenge each other one and for all, but the confrontation is worth it. 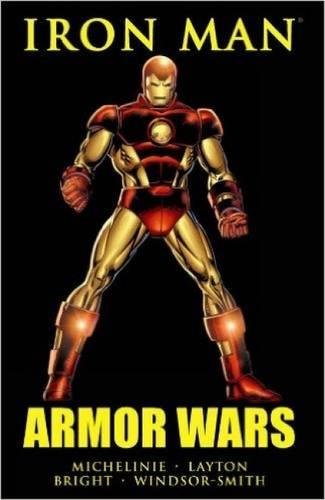 On the heels of facing Iron Monger, Tony begins to realize that his technology has been distributed and replicated by his enemies. Always fearing that the Iron Man armor would fall into the wrong hands, Tony begins a crusade to find and take back his stolen tech, even if it means breaking a few rules. Throughout the comic, Tony is constantly pushing the line and finding out how far he would go to keep his secrets safe. There are moments when Tony blurs the line between friend and foe and some relationships will never be the same.

As I said, the Iron Man movies are more fluid in their use of the comic's history. Iron Man 2 isn't really based on any one story, but has elements sprinkled throughout. While Armor Wars has yet to be explored to its fullest in the films, the second movie shows what happens when the bad guys get their hands on Tony Stark's inventions.

The comic is actually a lot of fun and this was where I started to understand the character better. It's packed with villains, cameos and the big moment where Iron Man turns his back on Captain America. I would highly recommend new readers check this story out. 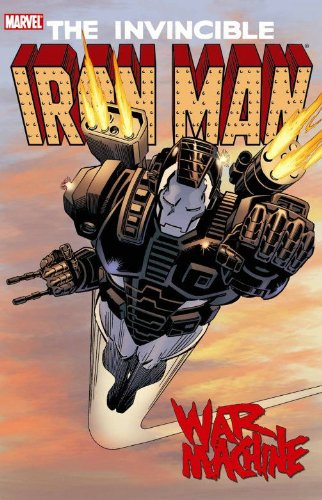 Tony Stark is dead! Or so it seems to the world. But while Stark might not be as dead as he seems, his best friend is in the dark. Jim Rhodes needs to protect Stark Industries, but also keep the world thinking that there's an Iron Avenger out there. It's then that he takes to the sky with the newest piece of hero armor, the War Machine. Now, it's Rhodes against the world, but at least he's got the tech to do it.

The second movie, once again, takes bits of this story and uses it for it's own purpose. Rhodes does become War Machine in the movie, with armor that looks very similar to his comic book counterpart. If Terrance Howard had been able to keep playing the character, the adaptation would have been near perfect. Don Cheadle is still a decent Rhodes and once he gets his armor, he's great as the government's newest answer to Iron Man. While the comics work a better story out of Tony and Jim's friendship, the movies do a more realistic job at tackling a character with Iron Man's technology and placement in the military.

The comic book was written in the early 90's and it shows. Rhodes had always been a great character and foil for Tony, but the War Machine arch wasn't great. The character became a stronger player in the Marvel Universe, but he didn't have a strong start. Blame it on 90's extremist.

And speaking of extremist...

Written by Warren Ellis, this was the comic that reworked the character in 2005. His origin was updated slightly, his armor was upgraded and he started to become the futurist that shaped his decisions in the years to come. The Extremis virus changes people at their DNA core and improves them physically and mentally, almost like the super soldier serum. By the end of the story, Stark has injected himself with the virus and he gains his first superpowers, being able to mentally control his armor and the technology around him.

The third Iron Man movie is the one most directly influenced by the comics, picking a specific story and using it as the whole plot of the film. Both characters from the book, Aldrich Killian and Maya Hansen, are major players in the movie, even if they're reworked for the screen. The Extremis virus is portrayed fairly accurately, I was surprised the movie didn't give Tony the virus, in in the process the same powers he gained from the story, but it was probably a safe move to keep the character grounded. Besides that, he does create technology that allows him to have the same summoning powers over his armor and it works well in the movie.

The comic, however, may be the book that inspired the movie, but that doesn't mean it's good. The Extremis story, all six issues of it, is one boring read. Ugly art, zero pace and wordy panels keep this comic from ever finding footing. The last issue has the big fight between Tony and the Extremis' experiments, but it's not worth the read. This was back when stretching a story out for trade release was the thing to do and it was a bad idea. It's strange to think that a story this influenced on the character in all forms of media is this dull, but it is.

Unless you're one of the majority, because they seem to love it. 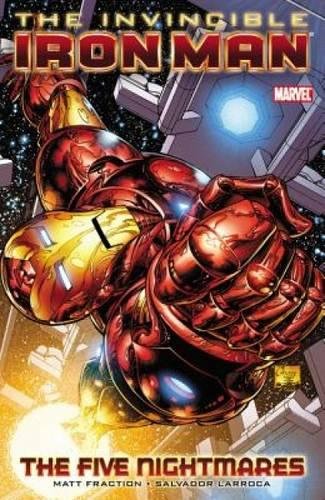 There are other stories that might be worth reading in your search for finding the movie's basis. Demon in a Bottle is the story that showed how self-destructive the character can be and, while not with alcoholism, the character shows these traits in the movies. Iron Man: Enter the Mandarin might be a good choice, if you wanted to see what all the fuss is about in regards to Iron Man 3's big twist. The first volume of the relaunched Invincible Iron Man is a story called The Five Nightmares and is an interesting read as it's actually the comic that was inspired by the movie.

Iron Man is a great character, off and on screen. I hope that the movies, like I do with all superhero movies, pique your interest into the world of comic books.