Blessed with a Physician Father and Schoolteacher Mother, I acquired the gift of learning at an early age. The passion has grown ever since!

A Case of Vanishing Inspiration

I once started "full steam ahead" writing an article based on a subject that sparked my enthusiasm to the point that everything else was oblivious. I continually pieced together the publication until reaching the "state of diminishing return", that point where the brain has been over-utilized, spent and going any further would be more detrimental than beneficial. So I hit the sack.

Revisiting the piece the next morning, it was blatantly obvious that the previous nights work was disjointed and poorly constructed in general. I became deeply discouraged and found the enthusiasm completely gone.

The topic was hot at that time and needed to be finalized with as much expediency as possible. Two articles bordering on the issue had surfaced in the previous couple of days evoking an additional sense of urgency to publish mine before its gist was covered by another writer.

The near panic was stressing me out such that it was affecting my sleep. I would arise during the night and hover around the PC thinking that perhaps the rush of initiative would return. After several failed attempts to get back into the swing of the article, I simply walked away from it.

In distancing from the project, I found myself unable to fully focus on any other task due to the nagging persistence of the unfinished article dangling at the rear of my psyche.

Conducting some research on the web and starting a forum group on the subject, I ran across some helpful pointers.

Search for a Solution

What did some of the great ones have to say about it?

“The best way is always to stop when you are going good and when you know what will happen next. If you do that every day … you will never be stuck. Always stop while you are going good and don’t think about it or worry about it until you start to write the next day. That way your subconscious will work on it all the time. But if you think about it consciously or worry about it you will kill it and your brain will be tired before you start.”

“Pretend that you’re writing not to your editor or to an audience or to a readership, but to someone close, like your sister, or your mother, or someone that you like.”

“Over the years, I’ve found one rule. It is the only one I give on those occasions when I talk about writing. A simple rule. If you tell yourself you are going to be at your desk tomorrow, you are by that declaration asking your unconscious to prepare the material. You are, in effect, contracting to pick up such valuables at a given time. Count on me, you are saying to a few forces below: I will be there to write.”

Another great writer of the 20th century began a journal of his dreams to conquer his "blockage" stating that dream journaling is special because only you see the dream so nobody can argue the points or sue you for libel or plagiarism.

“If one can remember an entire dream, the result is a sense of entertainment sufficiently marked to give one the illusion of being catapulted into a different world . . . . One finds oneself remote from one’s conscious preoccupations.”

The quip that made the most impact, however, was from a lesser known pulp author and poet named "laureate of American lowlife" by Time magazine in 1986.

"Writing about a writer’s block is better than not writing at all."

By making on objective observation, I arrived at the following determinations:

Finally just got mad at the situation and decided to jump back on the case until achieving some results. When correctly managed, anger can be an effective motivator.

Plugging away at the piece with thoughts, making alterations and corrections, and keeping the file open and in front of me in the editor, was the key first step. Keeping other windows minimized and filtering out distractions was vital.

Getting into a state of mental flow, I was soon able to see the fragmented work in a different light and began to feel a sense of relief by determining that with just a few simple and minor adjustments, the article was beginning to take shape.

With each pass through the text, considerable improvements were beheld and the final draft was becoming a reality. The energy was returning.

Ultimately, the end of the tunnel appears and a feeling takes over of not being able to get the final touches to perfect the document - as if its just not quite good enough to publish yet. That's when the "writer's block" has been conquered and you're now faced with its reciprocal, the "letting it go" conundrum.

The solutions for over-coming writing obstacles are as unique as each individual writer, what works for one may not for another.

It is a personal characteristic of mine to completely read a book that I've begun whether liking it or not. I feel that every published author deserves to be heard out to the completion of the endeavor. The same sense of completion can be applied to writing. Maintaining diligence until the final word is added, by whatever means necessary, is the key to tackling "writer's block". 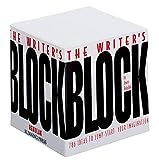 How to Overcome Writer's Block

The 10 Types of Writer's Block and How to Overcome Them

★ Blocked - Why do writers stop writing? The New Yorker