You hear that Mr. Anderson? That is the sound of Cult being back on Hubpages. And man is it good to be back. To those of you reading for the first time, welcome. Hope you enjoy the ride! To those who have followed my from Please Change Disks to Continue...for this next chapter, you're the coolest. For those of you who haven't, I assume it's because this isn't an LU/Community column, and you are thus forgiven. What do we have on tap for tonight? How about a Cult Tribute. For those of you reading me for the first time, I like to do tributes for some works of art (be it movies, wrestlers, TV shows, comic books, ect.) that haven't gotten as much play as they deserve (hence they're Cult Tributes. Also, Cult was my user name on a wrestling forum, so it works out in the end anyway!). This is one of them. So without any more bluster, let's take a look at an excellent comic book, written and drawn by two of the most underrated talents in the graphic novel game today. This, my friends, is a Cult Tribute to The Umbrella Academy: Apocalypse Suite.

What You Already Know

The Umbrella Academy: Apocalypse Suite was the first entry in the comic book/graphic novel series The Umbrella Academy. Beyond that, the only other noteworthy thing about the comic was who wrote it. That would be Gerard Way, the same many who just so happened to be the lead singer of a band called My Chemical Romance. That's right, the same dude who brought you such brilliant albums like The Black Parade and such brilliant songs like "I'm Not Okay" is also a graphic novelist. No word yet if his next step will be to take over the world.

What You Didn't Know

Apocalypse Suite tells the tale of, what else, superheroes. In the distant past, forty three women inexplicably give birth at once, despite having shown no previous signs of pregnancy. Only seven of the miracle children survive, and are soon adopted by Sir Reginald Hargreeves, a scientist/entrepreneur who is secretly extraterrestrial. Believing them to have superpowers, Hargreeves (known as the Monacle) trains the children to save the world, something they do quite well for the first several years or so. As with most bands however, time eventually drives a wedge between the group and the Umbrella Academy goes their separate ways. It isn't until the Monacle's death and the rise of the White Violin (former Academy member Vanya) that the Academy reunites to, what else, save the world. Very Buffy esq, I know.

Now if that sounds like a lot, that's because it is. It's not surprising though. Way, for anyone who hasn't listened to an MCR tune, has long been fascinated by a multitude of genres, including horror, science fiction and romance among others. While love isn't really on the menu for Apocalypse Suite, the others are, and Way and artist Gabriel Ba are tremendous in bringing to life such a wacky, upside down/inside out alternate reality. What makes it fit so well is that the characters mirror the world with their dysfunction. If I may be so bold, it certainly seems like Way was inspired by his life as a lead singer when writing this. Anyone who loves music knows how difficult it is for a band to stick together over a long haul; more often than not, life on the road eventually catches up to them, followed by creative clashes, ego clashes, legit throw downs, and long periods of time without speaking to one another (ironically, MCR broke up a few years after Apocalypse Suite, though it appears their split was on decent terms). Intentionally or not, Way's Umbrella Academy very much seems like a band getting back together after a long time. It's what ultimately makes the story work so well in my opinion.

Before we get to that, we might as well talk about all the main characters. There is six of them after all (the seventh member, The Horror, dies before the main story begins), not counting the awesome Monacle. Let's meet the Umbrella Academy.

Spaceboy, the team's former leader, an accomplished astronaut, and a dude with the unfortunate distinction of having his head attached to the body of a gorilla. And you think your life is hard.

The Kraken, the Batman of the group and Spaceboy's rival for top spot. Once played bass.

The Rumor, able to kill people simply by lying to them, divorced single mother and Spaceboy's love interest. Hold your horses now kids, remember that they're all adopted. It's not incest. Leave your Duck Dynasty jokes at Bray Wyatt's doorstep.

The Séance, the most powerful of the group, as he has powers of levitation, telekinesis and can talk to dead people. Think Bruce Willis from The Sixth Sense if he were on steroids. There's one problem; The Séance's powers only work when he's not wearing shoes. Which pretty much means he's really effective at beach/pool parties, or is often getting blisters from walking around without shoes. He's also evidently a huge HelloGoodbye fan, as he has those words tattooed on his hands. I'm totally not reading too much into that, by the way.

White Violin, the runt of the group who preferred playing violin more than she did being a superhero. That totally, TOTALLY, doesn't lead to her becoming a villain in this story at all.

As you can see, those are some pretty interesting characters right there (and that's not including the monkey named Pogo. Top drawer to you for that creation Mr. Way, top drawer). However, none of them hold a candle to The Boy, the fifth member of the group and by far the coolest non ten year old in the history of the western hemisphere. What's the Boy's story? He's a time traveler who has been away for about 50 years, learned a way to get back home despite being told there wasn't a way back home, looks no different than the day he left, and is the most diabolical hater in Way's Player Hater's Ball. Don't mess with the Boy! This kid would've been Way's greatest creation if he hadn't written "The World is Ugly" a few years later. All hail the Boy!

Truth be told, I was always going to read the Umbrella Academy series due to my fandom of MCR alone. But none of that could've prepared me for how fun Apocalypse Suite would be. The comic/graphic novel is as entertaining a read you can find, packed with colorful characters, a colorful world, GREAT issue names (I cannot begin to express how much I love the fact that Way named every issue like it was an MCR song) and a nice little story about a dysfunctional family coming together. I can't recommend this book enough. If you're a fan of MCR, you'll love it. If you're a fan of good stuff, you'll love it. And the best part is, Way was just getting started with this series, as you'll see with the follow up issue, Dallas.

That's it guys. I'll be back tomorrow with a new Lists 101 for the two or three Community fans that crossed over tonight! Till then, behold the powers of the great DUCHOVNY!

Who's the best member of the Umbrella Academy? 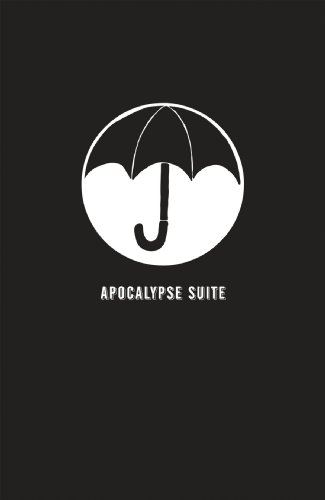