(DC) Superheroes Who Deserve Their Own Movie

I answered the question of which Marvel character can hold their own movie franchise over at my last Hub, but like a good little geek, I instantly began thinking about the other major superhero universe. DC, with Warner Bros., has done very little in terms of their choices. A whole universe is under their control and all they can ever seem to muster is a Batman or Superman movie! They can't even make these two team up! But, just because I'm a Marvel fan to the core doesn't mean I don't read DC and that doesn't mean I don't have a few picks for movies. Like my previous post, this is more about characters who can hold a movie by themselves.

This might be cheating, as none of these characters are heroes. Both teams are made up of a collection of villains, ranging from all over DC's history. But, the characters themselves are great and either team would make for a great movie!

1. The Suicide Squad- Otherwise known as Task Force X, they are a government funded, black ops supervillain team. The missions that the government doesn’t want reported on but are a bit too big for regular folks; they're the missions the Suicide Squad goes one. The team is led by Amanda Waller (who could be seen in a forgettable appearance in The Green Lantern), and their field leader, Rick Flagg. The idea is that each member has a small bomb inside of them and if they don't follower orders, that bomb goes off. If they do a good job, and survive, then they get a full pardon after five years of service.

2. The Secret Six- This is a smaller team of villains, just trying to make a living. They're the A-Team of bad guys. They get a mission, complete it with extreme prejudice, and make a buck. These guys have no connection to the government and have no fuller purpose than seeing the next day. But this leads to a lot of painful realizations, some see their lives without meaning, some struggle with the tight-rope between light and dark, and some just don't care. With characters like Catman, Scandal Savage, and Deadshot, this team has personality to spare.

3. The Drama- You know how The Avengers is capitalizing on the fact that the heroes didn't get along at first? Well, both of these teams have that, but are much worse about it. Captain America, no matter how mad he gets at Iron Man, is not going to shoot him in the head. Deadshot will, though. The infighting would be brutal, but in the end, for one reason or another, these teams would get it together. Those moments of character, those redeeming seconds of humanity, those will make the film. Either team would work on this level, it's just a matter of preference.

Either way, the movie better be rated "R".

I know, Batman has a movie. He has eight movies. But this isn't the same Batman and the movie would be like no other Bat-film you've seen.

1. His Background- It's fifty years in the future. Bruce Wayne has retired from the role of Batman. Terry McGinnis, stumbles in the mansion and discovers Wayne's secret. Terry steals the suit and goes off to avenge his own father's murder. What comes is a chance for Wayne to carry on the legacy and for Terry to redeem himself after years of juvenile delinquency. This, as most people my age remember, was a great animated series and was one of the coolest things to come out of the Batman legacy. Now, it's even part of comic continuity and a full part of the DC Universe.

2. The Difference- In some ways, this movie would be more like Spider-Man than traditional Batman films. Terry struggles with being a teenager and balancing school and being Batman. He has a steady girlfriend to worry about. Terry is more of a talker than Wayne ever was and he's not above fighting dirty. The suit is also much different, increasing strength and speed, while giving Batman all new gadgets and flight. Plus, the Batmobile would be the coolest car in theaters.

3. The Pitch- It's Batman. In the future. See, it's an easy sell. I honestly can't imagine why this shouldn't get made. You have a great setup with Wayne as the older, wiser mentor and Terry as the brash, still learning the ropes kid trying to make good on his life. Cast Michael Keaton as the role of Bruce and pay tribute to the old films. The part of an elderly Bruce Wayne might even be the most appropriate role Harrison Ford could play today. While it might be too different from the normal Batman story, it's something that should be considered.

It would even be the perfect way to separate itself from the current franchise. 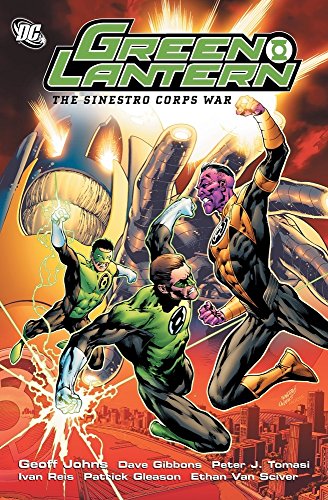 Just like my Marvel Hub, I've decided to add a character who already has a movie. But it was such a disaster that I can't see the series getting better without a reboot. Maybe the sequel will prove me wrong, but I doubt it. However, Green Lantern is one of the few Justice Leagues outside of Superman or Batman that I believe could hold a movie franchise alone.

1. His Background- If you've seen the movie, you know that Hal Jordan is the first human to join the ranks of the Green Lantern Corps. He's a man who lives without fear, who's headstrong and doesn't like being told what to do. But the cool thing about being a Green Lantern is that it's a whole team of intergalactic protectors. There are other Corps, as well, such as the Red and Yellow Lantern. Hal isn't even the only human, with at least three others being prominent characters in their own right.

2. The setting- The problem with the 2011 movie is that it was too by the numbers and too safe. There were moments of absolute comic book accuracy, but many elements feel flat. A Green Lantern movie shouldn't even take place on Earth. The cool thing about the Corps is that it ranges over the entire universe. What a Green Lantern movie needs to do is separate itself from looking like an Iron Man or Superman clone. Keep the movie in space and you won't look like any other superhero movie and they need to do this before Marvel owns that genre with Thor sequels and Guardians of the Galaxy.

3. Make it an ensemble- Personally; Hal Jordan is not a great character. Others may disagree, but I find him to be fairly dull. But, with an entire Corps, you can bring in all sorts of characters. Stop trying to play up the lone hero and make it a team film. Make it a war film. Let characters like Kilowog and Guy Gardner have an equal role. Let the things that make Green Lantern unique flourish instead of hiding it in subplot. Doing this, they could even call the movie The Green Lantern Corps and separate it from the 2011 movie.

And please, use a better villain. Casting Mark Strong as Sinestro and not making him the villain of the movie was a serious mistake.

In my opinion, while DC has the Green Lantern Corps, Marvel does space and cosmic stories better. But, DC does magic better than Marvel. As a movie, I'm not sure how to put this together but let me state my case.

1. The background- While Marvel has Doctor Strange as the resident magician; DC has an entire universe of mystic heroes. Characters like Swamp Thing and John Constantine fight the supernatural, Dr. Fate and Zantana use magic every day, the demon Etrigan roams Hell while Morpheous is the Lord of Dreams. I could go on, but I'm trying to show that DC has magical heroes of every level, who are all very different. Some aren't even alive anymore, like Deadman and The Stranger. While I don't believe many of these characters could hold their own movie (outside of the Sandman), that wouldn't be a problem since many of these characters are connected. Swamp Thing and Constantine are pals, even.

2. The problem- The biggest issue is that, while many of them are tied to each other, these characters aren't part of a set team. There is no magic group that gets together and fights the dark forces. While they often interact and cross into each other’s realms, many of them are just acquaintances. But if DC and Warner Bros. were serious about this idea, they could fix that problem easily. The comics do have something like that right now called Justice League Dark but that name is atrocious.

3. The benefit- Thor touched on magic but it was much more science-fiction than anything. Doing a movie about DC's magical heroes would be much less science and more supernatural. It would allow for the movie to stand out from the pack, the way the X-Men do by being mutants rather than just superheroes. It could be darker, but not ruined by gritty realism. If they could pull this off, DC would have a very unique movie on their hands.

Anything to get the Sandman on screen.

This should go without mention but Warner Bros. just can't seem to wrap their heads around this idea. The potential is ridiculous and with the success of The Avengers, it’s insane this hasn't been green-lit yet.

1. Their background- This is DC's premier team. In fact, they did it first (in comics anyway). Superman, Batman, Wonder Woman, Flash, Green Lantern, Aquaman, and Martian Manhunter. These are the best of the best and they fight evil big enough to make Galactus look easy. Together, they would be the most iconic team put to screen.

2. Do what Marvel doesn't- I love how Marvel worked their characters together. Starting with solo films that lead into a team up was a great idea. But here's why they needed to do that. Characters like Thor, Iron Man, and Captain America are household names now, but they needed the movies to make them that way. Just going for a straight team would have been a collection of "Who?" rather than an anticipated movie. Those characters needed to introduce themselves. The members of the Justice League, however, don't. Everyone knows who Superman is, the know Batman and Wonder Woman. There is enough star power to hold a film without six others first.

3. Solo movies after- They need to make a Justice League movie, let it get big and then make the solo movies. People will see anything with Batman in it, but the Flash and Aquaman are tougher sells. So, start them in a big movie like this and get people interested. When the Flash movie comes out, people will be excited to see him doing his own thing, rather than wondering what he's about. It's the complete opposite of what Marvel is doing, but I think DC needs to do this if they're ever going to get on the bandwagon. What if the Incredible Hulk had come out after The Avengers and had everyone talking about him? DC needs to think like that.

This just needs to happen. No question.