When I first looked at Dan Simmons’ Hyperion in bookstores, I couldn’t get past the awful cover. I don’t want to insult they artist, but the design was a bad choice. A wagon-ship floating along a grassy field all while being watched by…something. I thought it was a fantasy novel at the time and my natural prejudice of the genre kept me from even opening it. One day, however, I was listening to a Writing Excuses podcast and Dan Wells suggested Hyperion as the book of the week. Soon after, I was in a “going out of business” Borders bookstore and found a copy of Hyperion sitting on a shelf, waiting for someone to buy it before the store closed forever.

Even after buying the copy, it sat on my bookshelf for a long time. A year went by and I kept finding something else I wanted to read instead. But, my choices were shrinking and it came down to the moment where I would either have to read the book or give up on it for good. With a heavy sigh and great reservation, I opened the weird looking book and began reading.

Hyperion blew me away. 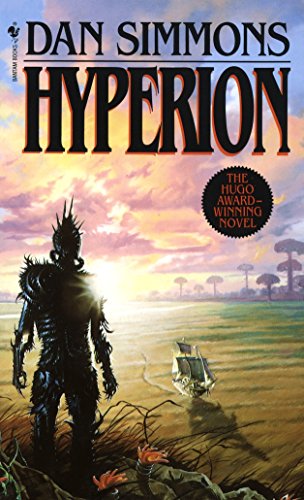 The story of Hyperion follows the pilgrimage of six characters as they seek the blade-covered nightmare called the Shrike. Each pilgrim comes to the planet, Hyperion, with a secret agenda. The Shrike is a creature they must all confront, but for different reasons; with each believing the monster will answer their request. Or kill them.

What makes Hyperion a wonderful read is that Dan Simmons writes it as a frame story. Present day, the characters decide the only way to be honest, and discover the possible traitor in their group, is to share their stories on how they came to be on their journey, and Hyperion, in the first place. What takes place then is a science-fiction version of the Canterbury Tales.

Dan Simmons uses this device to tell stories in every sub-genre of science-fiction. The first story, told by Father Lenar Hoyt, is a religious observation of the strange people that live far into the planet’s wilderness. The second story is Colonel Fedmahn Kassad’s and is a military tale like that of Heinlein. Martin Silenus, a poet from the original Earth, tells his story that resembles space operas like Dune. The story of Sol Weintraub is the tale of his daughter’s strange time disease. Cyberpunk and Blade Runner are on display in Brawne Lamia’s film noir story. The last story is that of the Consul, his being a political love story of time dilation.

Each character’s story is like reading a new book and everyone is as good as the last. Throughout the book, we’re given glances at all the corners of Dan Simmons’ universe; from the dying Earth to the new Web of planets, from the seedy computer hackers to the realistic military training simulations, from the normal life of scholars to the strange life of priests. The universe is vast but fully realized and Simmons knows how to make it all believable.

The book is not without some faults. Your favorite stories will vary from mine, but I found the detective story to be dull and Kassad’s adventures to do little for me. If there is a particular element of science-fiction you love, there’s a great chance it’s in this book but the same goes for the pieces you don’t care for.

The biggest problem with this book is that it ends on a cliffhanger. Actually, saying that might not be fair to cliffhangers. Hyperion simply ends. Once all the stories are told, only a few pages are left to wrap up the book, which they don’t. They end with the simple acceptance that there is a second book. Once you’ve read that, Hyperion is a more complete book but it hurts the first reading.

But don’t let these small nitpickings dissuade you from picking this book up; I’m just trying to be a balanced critic! Hyperion is a masterpiece of storytelling and genre-blending. It’s a glorious marriage of world building and character study. But, be ready once it ends; you’ll be wholly committed to seeing it through in the next book.

Fall of Hyperion takes place as soon as the first book ends. The frame-story device is dropped and Simmons tells his story in a linear fashion. And, while the pilgrims of Hyperion continue their journey to confront the Shrike, we now see what the rest of the universe is doing. The end is near, for the pilgrims and the whole population of the Web.

Two new characters are brought to the spotlight; John Keats and Merina Gladstone. Keats is an android with the original poet’s personality buried inside his consciousness. He’s brought into the war/political council of the Web by Gladstone, the CEO of the universe and the one who sent the pilgrims to Hyperion. Through these characters we see the Web falling apart and learn of the coming end of the universe. If the pilgrims can’t complete their mission, if the Web can’t hold back the Ouster rebellion, then the Web will fall.

Fall of Hyperion is a harder book to summarize. Because everything is coming to a head in this book, it’s difficult to talk about without spoiling the story. The pilgrims from the first book continue their journey and find themselves in new situations that could break them. We learn secrets and twists that we didn’t know where hidden from us but connect everything together in a way that we wonder how missed them in the first place. Keats, with a strange connection to the pilgrims, has his own story and agenda and it may turn out that he’s more important than he could imagine. The Shrike continues to be a mystery, even as we learn more about it.

Seeing the worlds of Hyperion and the societies on them also gives the reader a new look. The universe may be coming to an end, but it might not be a bad thing. As the Ousters and the Shrike seem to gain the upper hand, it’s hard, at times, not to want the Web to fall. Yet, because of Keats, Gladstone and the Hyperion pilgrims, you cheer for its victory.

The sequel takes a while to get traction. Where the first book won me over with the first tale, it took Fall of Hyperion over a hundred pages to get interesting. For most of the beginning, Simmons only touches on the pilgrims here and there and it’s an unsatisfying approach. I was worried that the book would be a letdown.

But, as soon as those first hundred pages are past, the book finds its footing and never stops. We see more and more of the characters from the first book and their confrontations with the Shrike. The atmosphere Simmons creates is an amazing one. Horror and despair cover the pilgrimage and you feel it on every page. The coming of the end of the universe is a constant weight and I’ve never felt like everything was really ending until I read this book. Simmons writes the fall with such expertise that you think he may have already seen it before. Yet, don’t give up hope while our characters are still kicking and fighting to preserve humanity. Whereas Hyperion ended with a sudden stop, the sequel gets a real finish and it’s one you can leave with feeling satisfied.

Dan Simmons Hyperion Cantos is one of the best pieces of science-fiction and literary works that I’ve found to date. It might be standing on the shoulders of giants; Heinlein, Asimov and Hubert, but Simmons makes the genre his own. I’ve only read a few books that have completely surprised and touched me the way Hyperion has, and I’ve read even fewer that I want to reread. I’ve yet to read the other books in the series, Endymion and The Rise of Endymion, but that will come with time. Right now, I’m still savoring and contemplating the wonders of the first books.

If you haven’t read this story, do so as soon as you can. It doesn’t matter if you like science-fiction or not. I had a friend take the first book with her on vacation as required reading and, while she thought the cover was horrendous, she found herself actually enjoying it. You’re enjoyment of the series may differ from mine, but it’s well worth it for the experience alone.