Dear Blanket That Must Be Frogged

Dare to make your own crochet blanket 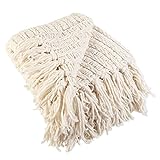 This is one letter in a collection of love letters designed to depict the ups and downs of being passionately, sinfully in love with the craft of crochet. For those who aren’t familiar with the craft, “frogging” is the term that is used when a crochet project isn’t working and the stitches need to be ripped back so that you can start over.

Dear Blanket That Must Be Frogged,

I was so excited when I first got the idea to put you together. I had made those yellow granny square motifs when I first started learning how to crochet and I never really thought I’d find a use for them. They were pretty enough as far as their floral design went but they were made of awful yellow acrylic yarn. Still, I’d tucked them away for a rainy day and some sort of inspiration. When the inspiration did strike and I realized that a blanket of larger squares in black and white would make the yellow pop in a lovely way instead of a frightening one, I was thrilled.

It took me awhile to start in on this project. I wanted to find the right yarn, yarn that would enhance the blanket by taking away from the scratchy acrylic centerpieces and yet that wasn’t so expensive that it would be a huge financial disappointment if this blanket plan didn’t work out. Looking back, I must have had an inkling even then that this plan wasn’t going to work out and so maybe I shouldn’t invest too much money in it. I ignored that gut feeling and didn’t hesitate to invest my time and efforts.

It was on a trip to Buenos Aires that I found what I thought was the right yarn. Buenos Aires is an amazing city for yarn lovers. There are two blocks of stores along a busy avenue where nearly every store is a yarn store. It’s called the city’s yarn district and if I’d known before I went on vacation that this city had such a thing I surely would’ve brought more empty bags for yarn storage. As it was I brought home all that I could handle in my combined carry-on and checked baggage. I threw out a pair of shoes to make the yarn fit. After all, who needs shoes?

And besides I had a plan that included starting in on your work. I felt like the combination of a very soft acrylic blend in white and a baby weight fine yarn in black would make everything work out texturally perfect. And things seemed to be going fine when I first started. I picked out sixteen of those yellow motifs and did an edging of white treble crochet around each of them. The plan was to then put a black edge around the white and then join four sets of four together to make four larger squares. Then I was going to link all four squares with more black and alternate a black and white border around the entire thing.

I got going adding the black edging around the squares. Things seemed to be going okay. I wasn’t working off of any pattern and I wasn’t doing a very good job of keeping track of exactly what stitches I was using or how many of them but just in eyeballing the finished larger squares it seemed like things were fine. In fact, I was really proud of your great start. I left you lying on the sofa. When my boyfriend came to visit, he immediately said, “that looks like eggs”. I should have realized then that you were not going to turn out like I had imagined in my own mind but I was worried about covering your tiny little ears and didn’t think about taking a second, more objective, look at you.

When I began joining the four large squares together, I realized that there was some kind of problem. For one thing, the baby weight lacy black was so flimsy compared to the acrylic that it kind of lolled around on the edges. It didn’t help that I was using a very open treble crochet stitch. I decided to work some rounds of single crochet to make up for the difference but it didn’t really have the intended effect. I ripped those out, redid them in triple. I imagine you were horrified when I then decided that it was right the first time and should go ahead and add some more single crochet rows. At this point I believe that you tried to tell me that you weren’t coming out square after all but I was a little bit wrapped up in my blanket designing process and didn’t really hear what you were saying.

I decided it was time to add some of the white yarn as an edge around what was now one big square (or mostly a square shape anyway) with four sets of four yellow motifs in the middle. I still thought we were going somewhere with this. I did the white edge in single crochet to give some more shape to the whole thing. The single crochet looked nice although it didn’t really look texturally right next to that lacy black yarn. I was beginning to wonder at this point why I decided to go ahead and use that black yarn for a blanket since it’s not at all blanket material but I was already committed to you. I was in deep. You were the one.

So we forged ahead. Now I’m pretty certain you were issuing me some major warnings signs at this point. Like when I tried to hold you up and it didn’t seem like you were entirely square in shape anymore. But you didn’t really struggle all that much and I thought things would work out fine. Every relationship has its problems, right?

It wasn’t until I’d done more of a black border and was on to the next strip of white yarn that I realized where one of the problems was. After joining all of the small squares together into one big square, I’d stopped doing any increasing. So instead of creating a square that was getting larger and larger into a blanket, I was turning you into some type of super humongous bag that was growing upwards instead of outwards. You may want to remember at this point in time that I did admit that I was wrong. I was gentle when I ripped out some rows and tried to fix the problem.

I admit, though, that you caught me off guard a little bit when you seemed to continue having this same odd growth problem in spite of my new increases. And you really caught me off guard when my attempts to simply double stitch in each existing stitch resulted in some weird tight ruffle around your edges. I wasn’t going to give up on you just yet, though. I really thought that we could work something out. Me, you and a bottle of wine and the problem could be solved.

But the last straw was when I held you up and saw that a portion of the black yarn joining together the four squares into one larger square had somehow simply come undone and was creating a hole right in the center of this project that I did not know how to fix. Really, did you have to go that far? So, I’m breaking it off with you. Enough is enough. Sometimes a girl has to know when it’s time to cut her losses and move on with her life. I’ll be spending the evening frogging you and saying my goodbyes.

In sadness but no longer forever yours,