Our National Parks: Deep Into the Grand Ganyon Along the Kaibab Trail

Along the Kaibab Trail

After finding a campsite in the dark Kaibab forest of early June (1960) on the North Rim, I knew that I just had to see this vast chasm of the Grand Canyon even if it was dark. The moon appeared just over the rim, and I could sense a vast openness before me even though I could not see anything. A prehistoric silence permeated the air and the very smell of rock and cliff abounded. By chance I caught sight of a tiny flickering campfire thousands of feet below me. It was then that I began to sense the magnitude of the Grand Canyon.

Back at the campsite, I crawled into my sleeping bag and tried to catch some shut eye even though I grew impatient for the coming daylight and my hike along the Kaibab Trail. Though I didn't think that I slept much that night, the pink hue of dawn seemed to come in minutes. I got up in the chilly air and soon had my Coleman stove hissing with a blue flame that sizzled a pan of eggs and bacon. With the last gulp of instant coffee and my lunch packed, I made sure I had plenty of water in my two canteens.

I llterally trotted to the rim. Distant reds and whites showed through the spruce trees. Brushing past the last dewy ferns, I beheld a view that turned me into a small child on Christmas morning. The Grand Canyon spread before me some ten miles wide and well over two hundred miles long. Through it carved the chocolate-brown torrent of the mighty Colorado River, still making the Grand Canyon even deeper.

As I started my descent into the Grand Canyon, my eyes gazed over endless gorges and ravines framed by the jagged South Rim and the distant pure white San Francisco Peaks. I was half tempted to abandon my hike and pick a spot along the North Rim to sit all day and stare out into space as though I were a Hindu mystic. Truly the world of the rim is a world of its own.

But, as park rangers continually suggest, in order to experience the Grand Canyon, one must descend below the rim to the lower, deserty realms and look back up. The descent into the Grand Canyon is the closet physical experience that I can imagine that corresponds to Dante's metaphysical depiction of a descent from a dark wood into the bolgia of the Inferno. I started the North Kaibab Trail of the North Rim to descend into geologic infinity. The forested rim with its Kaibab squirrels (a black squirrel with a bushy white tail), coyotes, deer, and mountain lions became the past; the descending trail my present; the shimmering red-green depths below, my future.

It was a bracing 40 degrees up in the spruce forests, but as I dropped below the spruce into yellow pines, the temperature rose considerably. The towering white cliffs loomed above me, but seemed insignificant compared to the dizzy space still below. The orange trail zigzagged below me deeper still until it disappeared into the depths. Along the side the trail grew orange-flowered pincushion cactus bordered with white-flowered prickly poppies.

Lower still and there were no more Canadian conifers; they were slowly replaced with scaly-barked cottonwood trees. A graceful golden eagle swooped over my head and glided lower into shimmering heat. Now I began to feel the layers of heat rising up from the Colorado River basin. After descending some two thousand feet below the eight-thousand foot North Rim, I looked back up at the sandstone and limestone heights. It was beginning to feel like I was beneath some ancient sea and that I had become a slithering starfish.

Sharp-pointed yucca with black-podded seeds bordered the rocky trail which, every now and then, hugged the very side of the cliff wall (see first photo), affording a direct view some thousand feet below. I gulped down canteen water to fast and realized that I should sip water in order to conserve it. But, boy did it taste good! In the distance I saw the pump house which is some three thousand feet below the rim, and after bouncing ever downward along the trail, I finally reached the building to refill my canteens and to see that the temperature was recorded at 120 degree F! I could not believe that there could be that much difference in 3000 feet.

A sign indicated that Ribbon Falls was but a quarter mile away around a bend, a good spot for lunch. Those gray-green canyon walls looked so aged, yet their barrenness gave them a timeless quality. Down here, and looking back up at those towering mountains, it seemed as if I had never set foot on the rim.

The white torrent of Ribbon Falls was a pleasant thing to see in such a thirsty country. It was even more pleasant after those salty-tasting sandwiches I had packed. Huge thunderheads started developing over the canyon, and in such vast space, I still do not understand why I developed a sense of claustrophobia. But, on I trodded downward, ever downward perhaps another thousand vertical feet to a spot where I could see the Colorado River looking like gleaming silver way in the distance. As the thunderheads began to boom endlessly echoing back and forth, I thought I had better turn around and return to my cool forest campsite. But I had to pause to admire four-foot tall prickly pear cactus with bright golden flowers scenting the air. However, the heat had become almost unbelievable. Another loud boom of thunder awakened me from a heat daze and I headed slowly back up the canyon (the reverse of mountain climbing).

Soon I arrived back at Ribbon Falls and dropped to my hands and knees to scoop up cool water and drink and drink. By the time I reached the pump house I felt a bit weak and refilled my canteens. It is one thing to descend a canyon this size and quite another to climb back out. I burnt up a whole canteen of water within a mile or so and was already working on my second and last canteen. Slowly I climbed higher and the once entirely azure sky turned to gray and thankfully the temperature eased. About ten switchbacks ahead of me, a mule team slowly wound its way along the canyon walls. Every time I stopped to rest and drink a dwindling supply of water, the mule team kept forging ahead slowly distancing itself from me. Those mules were a hell of a lot stronger than I!

Now I was out of water and I slowly crept toward those beckoning conifers. But I was weary--I knew I was beginning to suffer from heat exhaustion. But I am lucky! The ancient Kachina spirits sent down to me torrents of hailstones as lightning flashed in prehistoric fury. I ate some hail and began to regain my strength--enough strength to get me up to the North Rim! Nothing felt better than brushing past very wet ferns in a driving rain.

By the time I had reached my campsite, I lost all sense of perspective. It seemed as if I had journeyed to some other planet. I wasn't even hungry as I watched a full moon set into the canyon:

a full moon set to the west

casting shadows from spire to

into the very moon itself!

Advice: To hikers who wish to descend into the Grand Canyon, book a year in advance for an overnight stay at the Phantom Ranch on the Colorado River and hike out the following day to the South Rim which is lower and closer or book through the Park Service an overnight back-country camping permit and camp near the trail at an appropriate location. One can also book a pack mule ride down and back. It is an easier descent to the Colorado River from the South Rim than from the North.

Have you ever hiked down into the Grand Canyon? 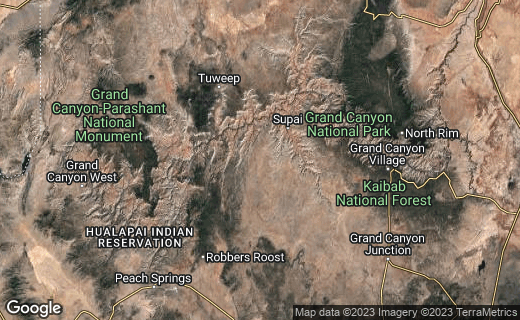