"Loneliness is the price we have to pay for being born in this modern age, so full of freedom, independence, and our own egotistical selves" (Sōseki, 1914). This is a problem that is correlated with issues on communication and interpersonal relationships especially when two people struggle with understanding each other or the person himself making intense effort to understand his own self. Loneliness is not just a state of solidarity or being physically alone, or isolation. Even amid company of other people, a person can still feel lonely when there is no one who empathizes with their condition. It is felt as well in times when a lot of things happen in their life and making decision is not a matter of choice but more on doing what is expected as part of responsibility.

One of the instances that reflects loneliness in Kokoro while the narrator and his friend are on vacation. Their company must be interrupted on this vacation because of family affairs that beckons the friend to come home. Both felt desolate because of their interrupted vacation together, on the part of the friend it was not just about the health concerns of his parents’ illness, in addition to that he was also pressured into marriage. The narrator has clearly expressed loneliness as he said – “I, who had taken so much trouble to join my friend, was left alone" (Sōseki, 1914).

In the novel, loneliness is more deeply rooted in isolation and the conflicting culture. The Meiji era is acknowledged as the period of modernization and Westernization of Japan. It is the period when the elements of the Japanese traditional way of thinking must exist with the new Western frame of thinking. In the Japanese tradition, people live by the Confucian code, and for those who had the chance to get into universities, they are presented with the conflicting thoughts of the Western world and traditions. It is the idea of Western individualization which has isolated them from their own society (Sōseki, 1914).

Reclusiveness on the part of the narrator – the Sensei has developed in the story through certain events in his life. The first was when he was cheated of his inheritance by his uncle. The betrayal by a family member was a painful experience for him because they have trusted his uncle, a member of their family. He was isolated further from the traditional society when he lost his innocence. He came to appreciate the beauty of the world particularly in women. But this is appreciation of beauty with doubt and distrust. He had been very confident of his character, until he found himself betraying others which made him more spiteful of the world including himself.

After he was betrayed by his uncle, he did not sue him because this will be interrupting his studies, but it does not mean that he has forgotten and forgiven. He had been holding on to his grudge and still seeks vengeance. This was significant in his transformation as a person; he had been consumed by his cynicism that it reflected in his thoughts and action too when he tried to hurt the feelings of his friend who had confessed about his love for Ojosan.

The period of loneliness in the novel is highlighted during the time of youth. It is perceived as the loneliest time in a person’s life because at this period the yearning for love is intense. When the family was not able to provide for this yearning, it was pursued through friendship and relationship. The perception of love still carries the tradition of beauty of the past and yet the loneliness felt by the narrator is rooted in the impact of Western thoughts which he tries to satisfy with love.

Despite the personal issues of the characters, the novel is basically grounded on the Meiji era. The conflict between modernization and tradition is not reconciled and this is manifested clearly when the characters committed suicide. The difference has been imminent that the narrator has been isolated from his family when he finds the life in the country unappealing and prefers his city life. He has been so drawn to Sensei that he even likes him more than his own father. Having to stay home with his family because of his father’s illness took so much of an effort for him because all he wanted was to go back into the city, but he was forced to stay.

“Sensei’s wife was not so modern a woman as to take pride and pleasure in being able to display her mental prowess. She valued far more that things which lies buried in the bottom of one’s heart.” (Sōseki, 1914). Using the heart in the discussion implies the tradition of Japan which is not parallel to what modern thoughts suggests. Rational thinking says intuition is not comparable to modernism. Death was also included as an imminent factor in isolation. It is an event that is most likely to happen to a person and the narrator’s loneliness got even worse when his father died and he got a letter from Sensei bearing the words, “By the time this letter reaches you, I shall probably have left this world –I shall in all likelihood be dead" (Sōseki, 1914).

The death of Sensei happened to be at the same time the father of the narrator died too. It was even more adding to his loneliness because he just lost two significant people in his life. And in here death has been the cause of isolation between him and his father and the Sensei. He went back to the city upon learning of the Sensei’s death making it more obvious that he prefers him more than his own father. It could also be noted in the earlier part of the novel that he may have been trying to stop the Sensei from killing himself, but he was not able to do so because he was in the country.

The effects of isolation are strongly manifested in the story. The inability of the characters to resolve the conflict between modernization and tradition has led them to wallow deeply into the pangs of loneliness and eventually took their own lives. Coming through loneliness takes more than just accepting modern ideals or continue living by the Confucian code. Aside from mutual understanding between friends and family members the person needs to understand himself and his own suffering to be able to get through loneliness. “How I wish, he said, “that you could understand my suffering.” (Sōseki, 1914).

Acting like human is not the fundamental problem, as human everyone is entitled to experience and feel different emotions. It is also a change bound to happen that traditions will be affected by modernization. But the modern thoughts should not be replacing or taking the place of traditions. Western thoughts can be integrated into the traditional society of Japan without creating conflict. But when people get educated in university and are exposed to modern thoughts, they misunderstood it leading them to believe that the traditions are keeping them from living a good life. It still leaves them empty and yearning for love because the modern thoughts they have embraced lacks the heart that provides the wisdom in the traditional society. Life may just be simple in the country, and without the complexity of the city and modernization but it is not a hindrance to aspire. As the sensei said, “Anyone who has no spiritual aspirations is an idiot.” (Gradesaver, 2018).

Death is neither a solution to loneliness, though in the tradition junshi is an accepted practice. As Soseki said, “Triggering a flag does not lead to a happy ending. Someone may understand you, but you cannot achieve true intimacy. Love and friendship cannot soothe loneliness” (Gradesaver, 2018). 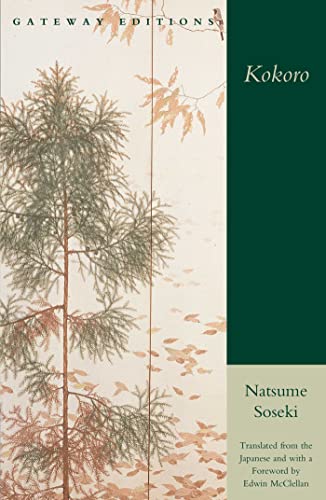