The Voyage published in 1940

Charles Morgan, the playwright and novelist, was a household name in the 1930s and 1940s and enjoyed an immense reputation in his lifetime, winning the James Tait Black Memorial Prize for fiction in 1940. He had a strong following in France and was awarded the Legion of Honour in 1936 and elected to the Institut of France in 1949 – only the second British novelist after Kipling. Yet his name is almost unknown today.

I was given a copy of his novel “The Voyage” when I was a student. It was, I was told, the best novel ever written. Few books could stand up to such a puff but I was captivated and my copy has travelled with me for the past forty years. I have collected his other novels but “The Voyage” remains my favourite.

“The Voyage” tells the story of Barbet, who owns a French vineyard in the fictional town of Roussignac (probably based on Jarnac in the heart of cognac country), close to Angouleme in the Charente region of France. Morgan describes his book as a “fantasy about a fool of God” and his hero, Barbet, has something in common with Dostoyevsky’s Prince Mishkin from “The Idiot”. The heroine is Therese, the illegitimate daughter of the village priest, who becomes a diseuse – a concept that has no translation in English. It means – very roughly – a pub entertainer, someone who sings and dances in bars.

The story concerns the relationship between these two from Therese’s teenage years in the village in a little bar and her rise to fame singing in Paris, the well-cared for mistress of a wealthy impresario. Therese sings the songs that Barbet writes for her, and this unlikely source of material, rather than the popular musical hall numbers of the day, brings her acclaim. Barbet himself is content simply to produce his cognac, cooper his barrels, listen to the birds and be kind to his prisoners, which rather bizarrely are in a small private prison in one of the courtyards of his house.

This book is beautifully written and it powerfully evokes life in rural France in the late nineteenth century, and the contrasting decadence of Paris. In some respects it reads as if it were a French novel translated into English. Barbet is not portrayed as a comedy figure as a simple country bumpkin as he has considerable status and respect in his own world, despite his eccentricity, and when he visits Paris to sell his cognac he is not in any way fazed by Parisian life. This harmony between country and metropolitan life is very French and it is remarkable that this book was written with such a fine touch by an Englishman, something that seems to have been recognised in France during his lifetime.

What elevates this book from others of the genre and makes it far more than a well-crafted period piece is Morgan’s ability to describe scenes that indelibly imprint themselves in the mind.

There are many such instances in this book. In the prison, Barbet as gaoler is paid to feed and keep confined the six prisoners in cells arranged around a courtyard of his farm. On one occasion, Barbet is late feeding and locking up his prisoners. They have become restless and have begun to riot. Barbet simply cannot believe that his prisoners would mean him any harm and goes into the courtyard without his prison issue pistol. His prisoners set about him in the dark. In the scuffle one of the prisoners grabs a matchbox from Barbet's hand containing glow worms that Barbet collected for his mother, and spills them out. At this point Barbet is more concerned for his glow worms than for his own safety and the prisoners kneel on the cobbles and pick them up. This dissipates their anger and they go to their cells peaceably. This small incident, blown out of all proportion, is regarded by local people as a miracle and evidence of Barbet’s saintliness (or insanity by others) and his reputation spreads to Paris as a result of the songs sung by Therese.

In Therese's circle of sophisticated and bohemian friends Barbet becomes regarded as a kind of prophet and his Protestant simplicity and innate goodness are seen as evidence of an interior wisdom.

The concept of the "Voyage" in the title is the theme that underpins this book. It is Barbet’s belief in liberation - that at some point he must simply walk out from his life,and embark on a voyage, an instinct like a journey a bird takes in migration. It is acting on such an impulse that he liberates his prisoners, an action that briefly results in his own imprisonment. He goes to prison without complaint accepting that he would rather be a prisoner than have the burden of being a gaoler of his fellow men. Yet after a short time he finds the prison doors have been left open, and he can leave the prison. Though technically an escapee, his fame created by the songs sung by Therese means that the government are reluctant to return him to prison and he is not rearrested, a very French example of political pragmatism! He does not return to his vineyard and sells up and moves to Paris to earn his living as a cooper.

This story is much more than a love story. At the end of the book, Therese and Barbet embark on a literal voyage, buying a river boat and setting off into an unknown future.

“Well” she said, “here is our life beginning; together or apart – our life. What shall we do with it? Shall we make a plan?”

“not now,” Barbet answered “When we are ready we shall know what to do”

Other books by Charles Morgan

The Gunroom (1919)  This is based on Morgan's experiences in the Royal Navy (1907 to 1913).  The Gunroom created a minor sensation because of its exposure of the habitual mistreatment of junior officers in the Navy.  It was unofficially suppressed possibly as a result of influence from the Admiralty; but it is believed to have resulted in significant reforms

The Fountain (1932)  This is probably Morgan's most famous novel.  It is based on Morgan's experience as a POW under internment in Holland during the Great War.

Portrait in a Mirror (1929) brought public recognition.  Again autobiographical, based on his childhood and adolescence.  This novel gives a wonderful picture of life in a great British country house at the end of the nineteenth century.

Sparkenbroke (1936) A "big" novel, comparable with The Voyage and The Fountain.  It's hero is a neo-Byronic poet Lord Sparkenbroke.  Though part of the story is set in Lucca in Italy, this book conveys the beauty of the countryside of southern England.  It is a strange novel, with brilliant and profound sequences interspersed with ponderous and even pedestrian phrases.  This is the only one of Morgan's novels to have come close to being made into a film though plans never came to fruition.

The Empty Room (1941) is generally regarded as a lapse from his standard.

The River Line (1949) another novel with a French setting, which deals with the smuggling of Allied servicemen out of Nazi occupied France.  The key character ("Heron") resembles the Barbet of the Voyage.  This novel was not entirely well-received as many believed that Morgan over romanticised the Resistance.   There was a theare version of this play in 1952.

Challenge to Venus (1957) was his final novel.  It is set in Italy and its heroine is an Italian aristocrat. 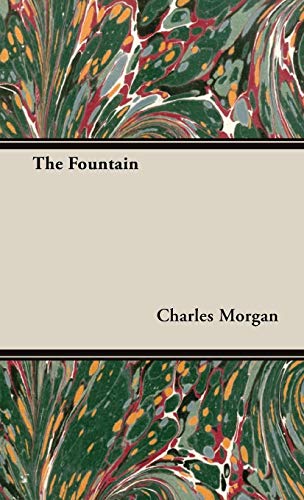