Chris has written more than 300 flash fiction/short stories. Working Vacation was 21st out of 6,700 in the 2016 Writer's Digest competition.

Melissa's book, Emerge: The Awakening has had some great successes since I first wrote this review. I thought I'd pass on to you what I have discovered. Here are some of the high points of 2015-2016:

2. 2015 finalist for the International Book Awards

Link to Melissa's Website and Her Amazon Affiliate Link

Emerge: The Awakening, About The Story

The first several chapters of Melissa A. Craven’s Young Adult Fiction, Emerge: The Awakening, captured my attention with the mysterious flight of fifteen year old Allie Carmichael and her adoptive parents from city to city and country to country. It was not clear who or what they were fleeing, but there was no question that young Allie was somehow in danger. All Allie knew was that, by their never ending moves to new locations, she was constantly being frustrated in her attempts to build lasting friendships.

The book opens with Allie’s growing hopes that she and her family might actually put down roots in Sydney, Australia allowing her to continue her budding romance with Gavin and getting to know his friends as well. But the young couple returns to Allie’s home one evening to find her parents frantically packing the car. The reader is also introduced, at this point, to an adult character named Navid, a college professor and also friend to Allie and her parents. Navid has come to say goodbye, and spends a quiet moment with Allie. Navid tells Allie that everything in her life is about to change and that she should always remember this young girl version of herself. Then the family moves on.

This time, though, Allie’s parents decide that, come what may, they are going to return to their home on Kelley’s Island in Lake Erie, near Cleveland, Ohio. This is when the changes in her life, spoken of by Navid, begin to come about. A new circle of friends develops, the most important relationship being with a teen named Aiden. 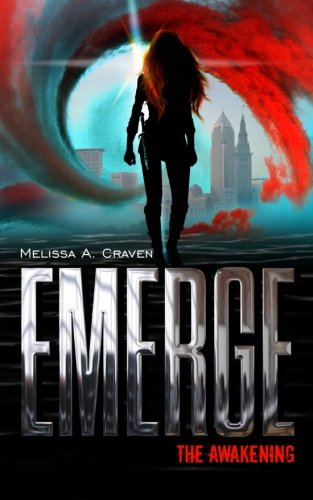 From this point on, the book is mainly about Allie discovering who and what she actually is. She experiences what is described as her Awakening, something most of her new friends have already gone through. Allie, Aiden and the others are not normal teenagers, and it takes the remainder of the book to find out exactly what that means. Immortality, superhuman abilities, an ancient enemy and prophecies which are even more ancient, are among the discoveries the reader will find in the pages that follow. By the end of the book, the ancient enemies have entered the story, threatening the existence of the immortals. The story climaxes at a very precarious point, yet the reader is satisfied with the ending.

Emerge: The Awakening, Insights About the Book

I came across, Emerge: The Awakening, at the suggestion of a friend, and I am glad I followed through and read the book. Originality is the distinguishing characteristic of this story. Young Adult Fantasy today is being pumped out like never before. In her book, Emerge: The Awakening, Melissa A. Craven has skillfully developed a believable plot that begins by blending friendship, romance, adventure and mystery but then builds on that by throwing in a race of immortal beings, martial arts, battle against ancient enemies and the anticipation of the fulfillment of a very old prophecy.

The thing that stood out to me most in Emerge: The Awakening, by Melissa A. Craven, is that she has presented this story of fantasy in a real life, believable context. This is not a new world the author has created or even a different dimension, but it is the world and time in which we live. I can almost believe that this ancient race actually exists, mixed in with the rest of us, attempting to live lives that mimic the mortal norm. They are hiding among us.

The fact that Craven wrote this story over a five year period is evident in the depth of her characters and the consistency and believability of the plot. There is another book on the way, and the author’s challenge will be to provide the same depth in a book that will most certainly be written in a fraction of the time.

I highly recommend Emerge: The Awakening, not only to young adults, but to all adults. I am 58 years old and was captivated by the plot and the pace of Melissa A. Cravens first book. Though she has a college degree in Interior Design and worked in the field for several years, this young woman has managed to transition into being a full time writer.

In their sixth annual awards, USA Book News chose Emerge: The Awakening by Melissa A. Craven as a finalist in their 2015 International Book Awards. In my opinion, the award was well deserved, and I anticipate that the success of the book will underscore the aptness of this recognition.

About the Author, Melissa A. Craven

Melissa A. Craven was born and raised near Atlanta, Georgia, but at age 17, moved to Cleveland, Ohio. Though she has since moved back to Georgia, when she thinks of home, she thinks of Cleveland. Very likely, that is the reason that her book, Emerge: The Awakening, primarily takes place in the Cleveland area. Melissa received her Bachelor of Fine Arts from the University of West Georgia in 2009 after which she worked as an interior designer for several years. Melissa continues to have a high level of interest in art and design. One way she expresses this interest is to shop for and refinish derelict furniture.