A short story about the love between father and son, and about the hurdles in life that threaten to derail that wonderful relationship; a fictional reflection that may tug at your heart or nudge your own life. In the end the things that matter most are the things that last; the love and experiences that a family shares and passes down from one generation to the next is surely one of those important and lasting things.

The River And The Boy

Setting about to change fishing line which had yellowed from age like the thinning hair of an old woman, the boy whistled a tune that his grandfather used to whistle when they were preparing their gear for a trip to the river. The boy worked happily to clean his tackle which used to shine brightly in the morning as the sun sparkled across the water, but now only sat in the box, brown with rust and tangled in old line.

Today the boy was heading out with his father to a secret spot upstream from the dam, a place that seemed as unlikely to harbor fish as it was for the two to fish it. The boy's father was a pilot who flew foreign routes and was seldom home. When he was home there was little time for fishing with his son, something he himself had grown up loving and which his father taught him to do well. He had always meant to spend time teaching his son the art and love of fishing, of spending time with nature and appreciating the splendid silence that echoed across the river like canyon winds, the smell of honeysuckles peering out of the briars and the sound of soapy river suds lapping against the rocky shore.

The two set up their fishing base along the edge of the San Marcos River outside of Staples, unpacking a worn rod and reel which the father had fished with for many years. The boy ran to a large boulder and stood on top of it, looking across the water as if to claim his spot.
"Do you think they'll be biting, dad?" the boy asked.
"Yep, today we'll make grandpa proud," he said with a reassuring smile.
Unpacking his tackle box and setting the needle nose pliers to the side, the father saw something that caused him to pause, motionless and stiff as if he had stepped near a snake. His hand dipped slowly into the tackle box and he lifted a brightly colored lure, it's red feathers spread softly and bright as fresh blood, and the silver body seemed untouched by years of seclusion.

His mind drifted as he remembered that this was the lure his father had bought for him on one of their earliest trips to the river, a long time ago. He recalled the morning he first tied it to line, ready to bring in a monster fish and impress his dad. His father was sitting, leaning back comfortably against a pile of sandstone rocks, his ball cap tilted up and away from his eyes while he finished the coffee which they had brought in a dented and worn thermos that had green patches of paint flaking off. His father was telling him that fishing was more than about catching fish, that it was a time to reflect on life and on nature, to remind us that life isn't where we're going but where we're at. He recalled asking his dad if he was happy with his life, and the memory of his father's careful and determined reply brought chilling goose bumps and water to his eyes.

Sharing The Joy Of Life

"Do you suppose the fish wish they had legs?" he asked. "Life is a gift," he went on, "and we have no right to begrudge or question it. We have the whole world at our feet yet so many people are never happy and are always chasing something more and they forget what they have." His father stood and walked over to stand next to him, placing his large aging hand on his son's shoulder and quietly said, "Son, remember to always love life. And that means that you have to love all of this and your place in this world."

Holding the beautiful red lure in his hand and inspecting the soft furling feathers, the boy's father, still thinking about what his father had said to him, remembers casting it into the river that morning as he and his father talked. He had moved his rod slowly behind his head and peered over his shoulder to make sure it was positioned just right, then with the full force of both arms he swung the reel forward and released the line at just the right moment, and the lure sailed about 20 yards downstream just outside a thicket of fallen branches. Reeling the line in with precision and slow enough to fool the fish into thinking it was a tasty bite, he felt a sudden and strong tug on the line and his arms whipped quickly up to set the hook in the fish's mouth. But the line didn't give.

"No!" he yelled, realizing he had gotten the lure snagged on a limb or rock.
"Easy, son," his father said. "Work the line easy, back and forth and apply pressure to the line and let it snap loose."
After he tried for a few minutes to loosen the lure, his father walked over and pulled his pocket knife out and grabbing the line from the tip of the rod he cut the line free.
"Dad!" the boy shouted, "That was my best lure and I didn't want to lose it."
"Son, I bought you that lure not so you would catch a lot of fish, which would be great, but because I wanted you to enjoy being out here and be excited about fishing with me. Don't you think we can buy another one of those lures? But this day, you and I sitting here enjoying life and each other, we can never replace. Let's enjoy this time and not worry about things we can't change or that don't really matter." Dipping his head the boy realized that his father was right, that the lure was not important, nor were how many fish they caught. Those things add enjoyment, he thought to himself, but the real value is in sharing the joy of life with those you care the most about. He felt foolish now for worrying about such a simple thing. His father again placed his hand on his son's shoulder and said, "Someday you'll buy your son a nice shiny lure to get him excited about fishing and spending time with you on the river." "Yes, I will," he replied with a smile.

A sudden and piercing yell brought the dad back from his early days. "Dad, I've got a bite!" the son shouted. At first standing and pausing to momentarily gather his thoughts, the father then rushed to his son's side. He could see the top half of the rod bending strongly and so he knew it must be a big fish. The father said, "Easy son, keep the line tight but let the fish have some if he wants it. He's big so let him wear himself out before you try bringing him in." The son smiled broadly and proud, like a runner who had just won the race. After a few minutes of fighting the fish the boy reeled it in to the shore where his father grabbed it by the lower jaw and lifted it out of the water. "Look at that!" the boy shouted.
"You really caught a nice one there," said the father proudly. 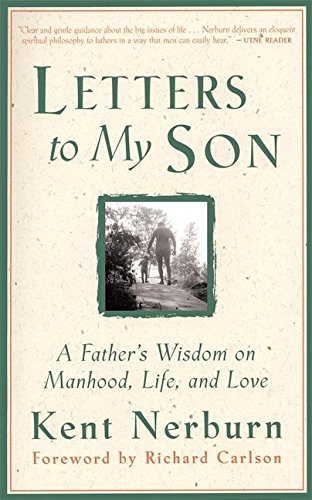 Letters to My Son: A Father's Wisdom on Manhood, Life, and Love
Buy Now

After the two had fished for a while and the excitement of his son's big catch had faded, the father sat down, leaning comfortably against the same pile of rocks where his father had sat. He continued to cast his lure effortlessly and with thoughtful precision while thinking more about the calming quiet than the fish. Soon he quit casting and set his pole down and watched as his son cast his lure in and out of the river, moving from this spot to that in hopes of getting another fish. The father took out the curious lure from the tackle box once again, wondering how it was possible for the lure to be there when he remembers vividly the day he lost it.

"There it is!" said the son, walking over to his father's side. "I thought I had lost it."
"What do you mean? Is this your lure?" said the father with a trembling tone.
"Yes, grandpa gave it to me the summer before last, just before he died," the boy said sadly. "It was our last trip together. He told me you would like it, but I had forgotten all about it and must have placed it into your box by mistake." The boy dropped his head and turned towards the river.

An uncontrollable wall of emotion came over the father as he realized he had not lived up to his promise to teach his son to love and respect life as his own father had done; he had thought more about where he was going than where he was at. His father had bought the lure, just like the one he had received many years before, filling in while he traveled the world as a busy pilot who seldom had time at home. Seeing the lure, the father knew that it was meant to remind him, too, of the important things in life; that being a father was more important than being a successful pilot or anything else. He had lost the vision that his father had shared many years ago, but he knew that through this special moment and this special place upstream he hadn't wondered far.

Did The Story Resonate?

Do you have a similar childhood memory?

I Appreciate Your Visit Today

Thank you for taking the time to visit this article. I hope you enjoyed it. I would like to recommend a couple of my other articles if you find them interesting.

The first is my very popular article about the paracord bracelet craft. Many people are really excited about making all kinds of cool things from paracord, and in fact its gotten almost viral the number of people using paracord to make things.

Next, I wrote an article about emergency essentials and how families can better prepare for even small, local emergencies, but also even become much more self-sufficient and be prepared for larger disasters.

Please check them out when you have time, and be sure to leave me a comment below. Thanks again.

I would really appreciate your comments.