Pages in the Kindle edition: 281

Finding Gobi is the true story of a man called Dion Leonard and a stray dog. Dion takes part in ultra marathons all around the world. This particular time he was running in an extreme marathon with other people in the Gobi Desert in China. On the second day of the week long race, he meets someone who is about to change his life forever, although he does not realise this at the time.

When Dion started to run on this particular day, a stray dog decided to join him and run alongside him. Dion has no idea why the little dog decided to run with him, but she did. For some reason the dog, whom he later names Gobi, latched onto Dion and followed him everywhere. Even sleeping with him in his tent and night. Of course, Dion grew attached to Gobi and began feeding and watering her too. Gobi and Dion had clearly formed a strong bond.

At the end of the week, Dion was asked what he plans to do with Gobi. He gave this some thought. He then decided to make plans on bringing her back to Edinburgh in Scotland, where he lived with his wife and cat, Lara. Things didn't quite go to plan though. When he left Gobi with friends, Dion returned to Edinburgh to make plans on bringing Gobi home. A crowd funding page was started to raise money on bringing her to the UK. But, Dion got a phone call one day telling him that Gobi had gone missing. Dion, obviously, was devastated, and decided to fly back to China to help search for her. With a group of volunteers, they produced leaflets and posters and scoured the place she was last seen to search for her. Eventually, she was found and reunited with Dion.

This story tells us what Dion went through from the time he first met Gobi in the desert and her final return to Scotland. Dion also tells us what Gobi has done for him and explains the difficult childhood he had with his own mother, and how Gobi has helped him deal with this.

As the text on the cover of the book says, this little dog does, indeed, have a very big heart. Finding Gobi is a book that will inevitably pull on your heart strings. It did for me anyway. For reasons only known to Gobi, she found herself into the training camp where people were feeding her and giving her attention. But when she met Dion she, for whatever reason, took to him and followed him everywhere. This is a book of love, heartbreak, tears and joy.

Dion explains in the book the difficult upbringing he had with his own mother and how Gobi had helped him overcome this. I purchased the kindle version of this book, and at the back of the book there are photo's of Dion racing and also many photo's of Gobi. This is a very touching and heart warming story to read. I couldn't put it down once I started reading it. Each chapter of the book is quite short. I love the way how Dion takes us on the journey of the first time he met Gobi and the hard journey he had on getting her back to the UK. This had been a long journey for not only Dion and Gobi, but for Dion's wife too who supported them.

Personally, I really enjoyed this book and would highly recommend it to anyone who loves stories like this. 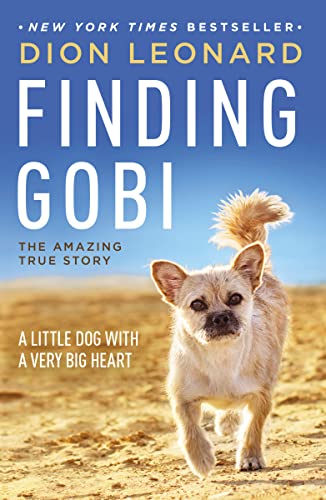