Virginia Woolf is one the greatest novelists of all time. She is the writer of Mrs Dalloway, To the Lighthouse, and The Waves. These novels are highly intensive when it comes to the literary technique of stream of consciousness, a term coined by the psychoanalyst William James. Flush is a fictional biography written in 1933. As in her protofeminist essay A Room of One’s Own where Woolf blends fiction and criticism, Flush is a mixture of fiction and non-fiction. In this brilliant work, unlike the above mentioned novels, Woolf looks at the world from an unfamiliar angle. She presents the Victorian society through the eyes of a spaniel who bears the name of the novel, Flush. The latter is the pet of the famous English poet, Elizabeth Barrett Browning. By writing Flush, Woolf examines every single detail about Elizabeth’s life. She triggers off deep questions that require a very different perception and consciousness in order the grasp them. Flush comes to record a society from the outside. The moment the reader begins the novel, he/she has the feeling that Flush looks similar to the works of Jane Austen and Victorian fiction. Flush is made up of six chapters. The first one is a kind of introductory chapter to show the everyday intimate relationship between the spaniel and Miss Barrett. It also provides the reader with extra information about the aristocratic origins of Flush. The second chapter continues to depict the new life of Flush in the city. At any rate, the third chapter demarcates the turning point of the story. Yet the title of the chapter ‘The Hooded Man’ tantalizes the suspense of the reader making him/her wonders who is this man. Later on, we figure out that the man is Miss Barrett’s lover. Because he feels jealous, Flush runs away from home. In the four chapter, Flush is shown in a district of the city dying of hunger and dirtiness. However, by the end of the chapter Flush manages to return to Barrett’s home. The fifth chapter takes us away from England to Italy. Flush then compares and thus criticizes the two countries in terms of democracy and so on. Ultimately comes the last chapter entitled ‘the end’, which portrays the last days of Flush before he died.

She spoke. He was dumb. She was woman; he was dog. Thus closely united, thus immensely divided, they gazed at each other. Then with one bound Flush sprang on to the sofa and laid himself where he was to lie for ever after—on the rug at Miss Barrett’s feet 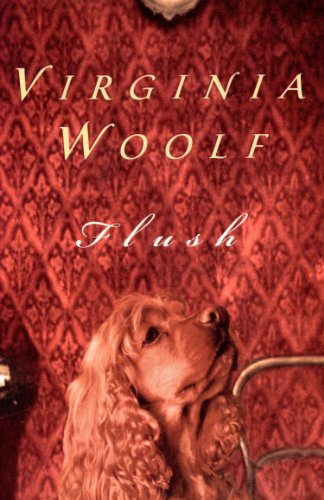